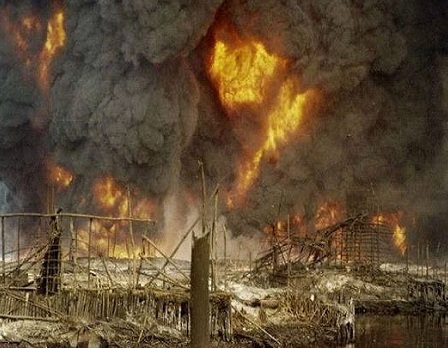 The Abura Crude Trunk Line operated by the Nigerian Petroleum Development Company (NPDC) at the Delta community of Otu-jeremi, in Ughelli South Local Government Area has been gutted by fire.

Reports said the explosion occurred around 1.30p.m, following a clangorous noise that has made residents living close to the facility scamper for safety.

ALSO READ: Fayose storms Ekiti House of Assembly, Says ‘I have a clear conscience, I fear no accusation

Soldiers have, since, cordoned off the area while firefighters were seen trying to put out the fire to prevent it from causing more havoc.

Fayose storms Ekiti Assembly, says ‘I have clear conscience, I fear no accusation

Okorocha to Ihedioha: You can’t order my arrest, it’s a direct invitation to anarchy