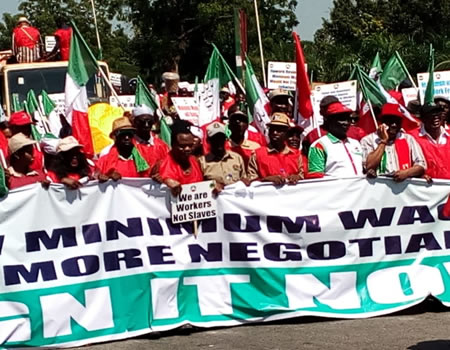 The governors of the 36 states of Nigeria have agreed to pay N22,500 as the new minimum wage to workers.

The governors, under the auspices of Nigeria Governors’ Forum (NGF) came up with the decision in Abujam, late Tuesday evening, after their three-hour meeting.

Earlier before coming up with their decision, members of the organised labour, the Nigeria Labour Congress (NLC), Trade Union Congress (TUC) and the United Labour Congress (ULC), had, on Tuesday staged a protest to mobilise support for their demand for a new national minimum wage.

The workers also supported by other civil society allies including Joint Action Forum (JAF) converged at Ojuelegba in Surulere, Lagos, as early as 7:30 am on Tuesday.

They took a long walk from Ojuelegba to the Gani Fawehinmi Park at Ojota where their leaders – Mr Joe Ajaero, president of ULC, Amechi Asugwuni, NLC Deputy President and Abiodun Aremu of JAF addressed them.

The gathering was under the close watch of officers and men of the Nigeria Police Force.

While addressing a crowd in Ojota, Asugwuni advised Nigerians to stockpile food in their homes ahead of the nationwide strike to begin Nov. 6.

According to him, the struggle is to defend Nigerians and the walk day would help sensitise Nigerians.

“Because once we commence the strike, there is no going back except the government agrees to our terms and conditions. The minimum wage is a legitimate right for Nigerian workers.”

Ajaero also said “We are on the road to tell the government that enough is enough.

“The Nov. 6 will be the mother of all strikes in Nigeria. Posterity will judge us if we fail to rise up to defend Nigerian workers.

“There is no good healthcare and electricity tariff is far more than 18,000 minimum wage and the tariff continues to increase”.

NAN also reports that the committee wrapped its negotiation and sitting in Abuja early this month.

There has been a disagreement between the Federal Government side led by Dr Chris Ngige, Minister of Labour and Employment and the labour over actual amount for the minimum wage.

LAUTECH: Alao-Akala should not confuse a framework for an agreement