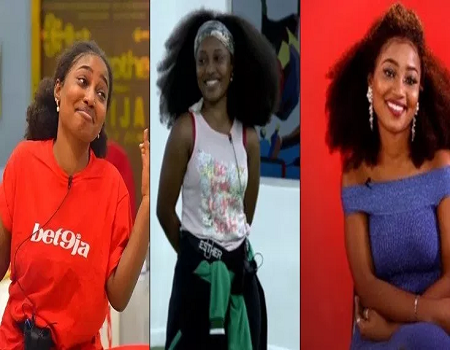 On a happy mood, the housemates of the reality show of 2019 season four Big Brother ‘’PEPPER DEM’’, played prank to celebrate the current Head of House birthday, Esther.

It all started in the early hours of Thursday, when Sir Dee and the celebrant’s bedmate, Frodd started serious argument insulting themselves with ‘F’ words at the garden which attracted Mercy, Dianne, the celebrant and other housemates to come into their midst for settlement.

Suddenly, Frodd shouted happy birthday, as every other housemates acted along, celebrated her with songs and showered her with water.

Thereafter, Sir Dee and Frodd revealed that the fight was planned to attract the celebrant to the garden for unexpected celebration.

In her Reaction, Esther was speechless by the surprise as she hugged all housemates in excitement.

She surprised all housemates, fans, lovers of the show and her boyfriend, who seemed to be outside the house, as she cooked delicacies for the housemates and read out her written love comments about her loved boyfriend, as housemates enjoyed their meal.