•Says I worked for Sylvia in last elections 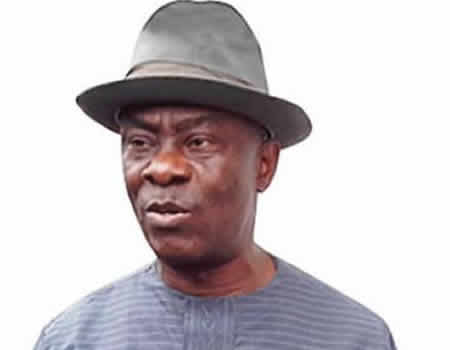 The peace initiative of the leadership of the People’s Democratic Party ahead of the Bayelsa governorship election has suffered a setback.

One of the aspirants, who participated in the party primary, Senator Nimi Barigha-Amange has dumped the party for the All Progressives Congress

Senator Amange surfaced at the APC national secretariat on Wednesday.

In his letter of intention dated September 9 and addressed to Chairman of his Ward,  2, Nembe local government Area in Bayelsa State, he pledged his loyalty to his new party and promised to ensure the victory of its candidate, David Lyon in the November 16 election.

Speaking with newsmen,  Senator Amange gave a startling revelation that he worked for the victory of the APC in the 2019 general elections in his home state.

He said:” Today, I can tell you that the candidate of APC, David Lyon comes from Southern Ijaw LG. That is the Local government with the highest voting strength. Definitely, that Local government is for APC. I come from Nembe LG and by my joining APC, Nembe has fallen into the hands of APC.

“Brass is where Timipre Sylva comes from and Brass normally is for APC. And I also assisted APC in winning my own Senatorial district in the last election. I also assisted APC in winning House of Representatives seat during February election. So, those three LGs are gone and we can give Kolokuma/Opokuma, the smallest local government to PDP because their candidate is from there. “Then, the Sagbama Local Government Area where the present governor comes from, will be donated to the present governor because his running mate is from Sagbama LG.

“Where the governor comes from, is where he picks running mate to PDP candidate. The question is, what will other LGs do? We can still donate that to him, so, we are taking three, they are taking two. The remaining LGs is 50/50.”

Accusing the incumbent governor,  Seriake Dickson of muzzling other chieftains of the party, Senator Amange said it would be a miracle if the PDP won the forthcoming governorship election.

“When I was in PDP, we were enslaved by only one man who regarded himself as emperor. There was no political activities there even if you want to be a Councillor. The 105 councillors were nominated by him. The eight chairmen were nominated by him, so, I cannot be a party to what is going on in PDP.

“I was one of the founding fathers of PDP in Bayelsa State. I did not join the PDP. I took part on the formation of PDP here in August 1998 and I have been there since. But I have never seen this kind of authoritarian rule. So, I have decided to pitch my tent with a party that can uproot this bottom from the ground, so that, Bayelsans will be freed, and I promise you, Bayelsans will be freed come November 16, 2019.”