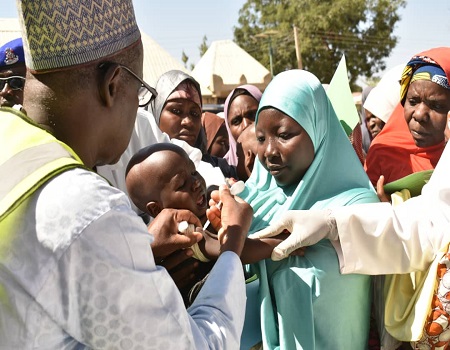 The declaration was made by the Nutrition Specialist with UNICEF, Nigeria, Bauchi Field Office, Dr Jackson Martins, during the official flag-off ceremony of the second round of the Maternal and Newborn Child (MNCHW) Week at the Miri PHC, in the outskirts of Bauchi.

He lamented that in Bauchi State, only 29.3 per cent of children age 6-59 months received at least one high-dose of Vitamin A supplement in the 6 months according to the 2018 SMART Survey.

He stressed that Vitamin A is an essential micronutrient for child development saying that at younger ages, inadequate intake can result in vitamin A deficiency (VAD) causing xerophthalmia, a serious eye disorder that can lead to blindness.

He also pointed out that, It is estimated that increasing vitamin A intake can decrease childhood mortality from such illnesses by 12%, or nearly one-eighth of childhood deaths.

The Nutrition Specialist added that during the round of the MNCHW, UNICEF has supported Bauchi State with a total of 4,032 bottles of Vitamin A – the Blue and Red Capsules – worth over N12.5 million to be given to children just as it also provided a total of 180,000 packs of Micro Nutrient Powder – worth over N43 million and data tools which contains essential Vitamins and Minerals important to improve a child’s immunity, for children between the age group of 6 to 24 months.

He then assured that “As a UN Agency with a mandate for child survival and development, UNICEF, through its Field Office, Bauchi, has continued to work with other partners some of which are here, to support Bauchi State Government to implement the MNCHWs.

He then commended the Bauchi State Government for implementing the 2nd rounds of 2019 bi-annual Maternal New-Born and Child Health Weeks, which expectedly will reach scores of children with preventive interventions such as Vitamin A, deworming, Immunisation, Iron Folate Supplementation for pregnant women, including Nutritional Assessment of children aged 6 to 59 months.

“We particularly appreciate the commitment of His Excellency, the Executive Governor of Bauchi State, for not only approving the release of funds for the implementation of this round of the MNCHW in the State but for making it possible for the timely implementation”, he concluded.

In his speech, Executive Chairman of the SPHCDA, Dr Rilwanu Muhammad said that Over 1.4m under 5 children as well as 300,000 women are targeted to receive free medical outreach services and materials during the second round for the Maternal and Newborn Child Health Week in Bauchi State.

Rilwanu Mohammed said that ”MNCHW is a week-long event organised to deliver an integrated package of preventive services known to be highly cost-effective for improving maternal and child health survival done with routine services at health facilities and designated points within our communities across 323 wards in the state”.

He explained that Some of the activities to be carried out during the week, include reaching all children under the age of 5 with vitamin A supplements, deworming tablets, screening for malnutrition, Birth registration, routine immunisation and promotion of other child protection services like hand washing, exclusive breastfeeding, Iron Folate as well as ACT to be given and serve to pregnant women freely.

The Executive Chairman boasted that Bauchi state is rated among the best in terms of attending to health facility that is why the present administration has appropriated N300m in the coming 2020 fiscal year for the procurement and management of malnutrition in the state just as it also ensures increased update of Vitamin A among infants and children under 5years of age.

It will be recalled that Bauchi state in partnership with the National Primary Healthcare Development Agency and other partners have since embarked upon measles and meningitis vaccination across the State.

During the MNCHW, high points of the event, include a demonstration of handwashing, administering deworming tablets to children, screening for malnutrition birth registration, routine immunisation as well as drama interlude by Yanke Yanke group.