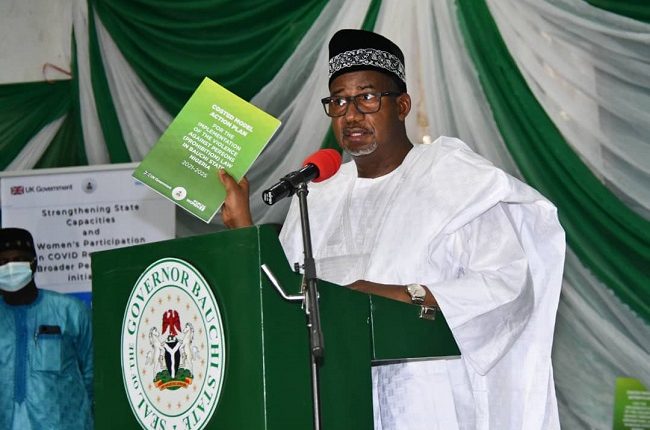 The Governor made the announcement on Friday at the launching of CMAP as well as the inauguration of VAPP Advisory Committee and Technical Committee for the implementation of the law held inside the Banquet Hall of the Government House.

He said that Bauchi State is the first state to domestic the Violence Against Persons Prohibition Law in the North East of the country lamented however that, “yet, translating the VAPP Law into practical action on the ground remains challenging with a persistent gap between commitment and financial support.”

He added that “however, the implementation of the VAPP law will only be possible when the fundings are provided and the political will is supported by targeted financial and other resources.”

Bala Mohammed stressed that “The Costed Model Action Plan (CMAP), is a significant achievement that underlines the commitment of the government of Bauchi State to implementing the Violence Against Persons Prohibition (VAPP) Law 2020 and eliminating violence against persons in our society.”

He assured that Through the Costed Model Action Plan (CMAP), for the implementation of VAPP law in the state, the government has identified the intervention strategies that will have a direct impact on the lives and welfare of the most vulnerable persons in Bauchi State.

According to him, “The CMAP is a tool that will help produce results through clearly defined activities and targets, careful costing and identification of actors responsible for the implementation of the programme. It provides an implementation strategy and clearly defined monitoring and evaluation components, it also includes an estimated cost of a package of the whole programme totalling over N3.7 billion.”

The Governor stressed that CMAP is relevant to the overall response to end violence against persons in Bauchi state as it offers a multi-sectoral and standardized approach that can be applied at all levels. Its goals are attainable with specific times and with a time frame and their achievements are tangible and can be reached.

“I welcome the publication of the CMAP and implementation of the VAPP law in Bauchi state. The plan was developed through many hours of consultative and participatory meetings with a committed group of key stakeholders who worked intensively and constructively on the process,” the Governor added.

He said that “I salute the commitment of the UN Women and our Development Partners and Guardians, the UK Government, for the funding and technical support provided at this level before we go to real implementation. This resource brings us one step closer to the implementation of the VAPP law and the elimination of all forms of violence in the state. Haven developed the CMAP, the government of Bauchi State is strongly committed to successful implementation.”

He charged that All stakeholders have an obligation to participate in creating a peaceful and safe environment for the growth and development of the state and especially for the security and protection of everyone.

In his goodwill message, Speaker, Bauchi State House of Assembly, Abubakar Suleiman, lamented the increasing cases of gender-based violence in the state and the country at large, saying that this calls for more action as provided in the VAPP law.

He further said that violence against persons particularly gender-based violence is barbaric and assured that the Bauchi State House of Assembly will continue to provide support to all programmes geared towards the protection of all.

In spite of the huge investment in the water sector by the government and international organisations, water scarcity has grown to become a perennial nightmare for residents of Abeokuta, the Ogun State capital. This report x-rays the lives and experiences of residents in getting clean, potable and affordable water amidst the surge of COVID-19 cases in the state…Bauchi earmarks N3.7bn  Bauchi earmarks N3.7bn

The Lagos-Ibadan railway was inaugurated recently for a full paid operation by the Nigerian Railway Corporation after about a year of free test-run. Our reporter joined the train to and fro Lagos from Ibadan and tells his experience in this report…Bauchi earmarks N3.7bn  Bauchi earmarks N3.7bn