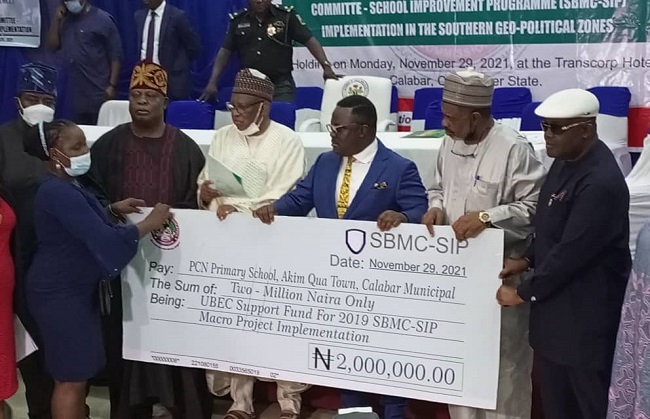 The program that runs in batches, is supposed to have this 2019 edition in 2020, but due to the pandemic, it is held this year. This means that the 2020 edition will be held in 2022 for obvious reasons.

Meanwhile, declaring the ceremony open, which also serves as the implementation of the SBMC and SIP programs in the South-South zone,  the governor charged UBE Committee Management to find a way and work towards addressing the failures of the present generation; a generation, which according to him, is responsible for a high percentage of societal ills.

He called for a  complete overhauling of the nation’s educational system, stressing that the rots seen in schools today could be removed if all hands were put on deck, the conscience of school pupils could be taken care of.

“People with good education listen to their conscience. Quality and good conscience of education start with the mind,” he said.

The governor advocated for the re-training of teachers.

According to him, if teachers were properly re-trained, the virtues learned during the re-training could be imparted on the pupils under the auspices of the teachers.

“Train a child well. Once a child begins to take his or her father for granted, he or she takes the entire society for granted. UBE Committee must sit up on the failures of our generation. The quality of this country can only be secured if we secure quality education,” he said

The governor said the teachers Training Institute at Biase Local Government Area would be commissioned in January next year.

He said immediately after the commissioning, the school would kick off, adding that the only way to salvage the nation from the imminent collapse was to imbibe the culture of instilling good moral values to the young pupils.

In his remarks, UBE Committee Executive Secretary, Hamid Bobboyi, said  1,147 communities would benefit from the UBEC fund, which would come in form of special grants of five million naira to macro and micro-grants of N2m and N350,000.