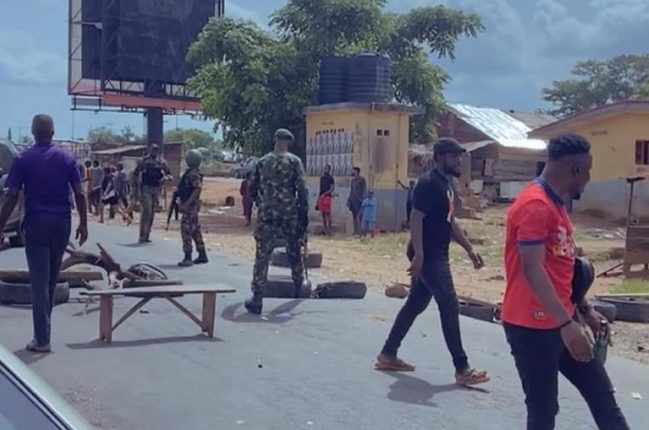 Students protesting the ongoing industrial action by the Academic Staff Union of Universities in Ile-Ife, Osun State were on Wednesday harassed by irate armed soldiers who suddenly ran onto them while expressing their grievances along the Ife- Ilesha- Akure expressway.

Investigations revealed that the soldiers who harassed the students while on their peaceful protest exercise were said to have dismantled all barricades made by the students and ordered them to vacate the spot where they were with immediate effect or face their wrath.

The dismantled barricades were that of the ones Infront of the Oduduwa University, Ile-Ife and the one made along Ile-Ife – Ilesha express road.

One of the protesters who simply identified himself as Olusegun revealed to our reporter that, it was God that saved them from the brutality of the armed soldiers numbering five who threw decorum into the wind while commandeering them to quit venues of the demonstration.

It was learnt that the soldiers were travelling towards the Akure axis in a bus when they suddenly jammed the protesters in their large numbers, ordering vehicles plying the routes to turn back and go back to where they were coming from.

Felt dissatisfied with the development, it was learnt that, the soldiers forced them to vacate the scene of the protest and used about an hour there to ensure that, the protesting students did not come back to the place.

After this, the soldiers embarked on their trip to their destination.

Before their barricades were dismantled, the protesting students had earlier threatened to disturb the conduct of the state’s July 16 governorship election if entitlements of their striking lecturers were not offset and closed schools in the country are not reopened.

“The students, who converged under the aegis of the Great Ife Concerned Students in collaboration with the Fund Education Coalition, charged the Federal government to intervene in the demands of the striking lecturers with immediate effect to discourage students’ idleness and other unholy acts in the society.

Speaking with journalist, Salvation Aworanti, the vice president, Obafemi Awolowo University, Ile-Ife, Students’ Union, who was part of the protest said “our agitations still remain the same. Government should respect the agreement reached with ASUU in 2009.

Confusion trails opening of AAU as lecturers insist on strike