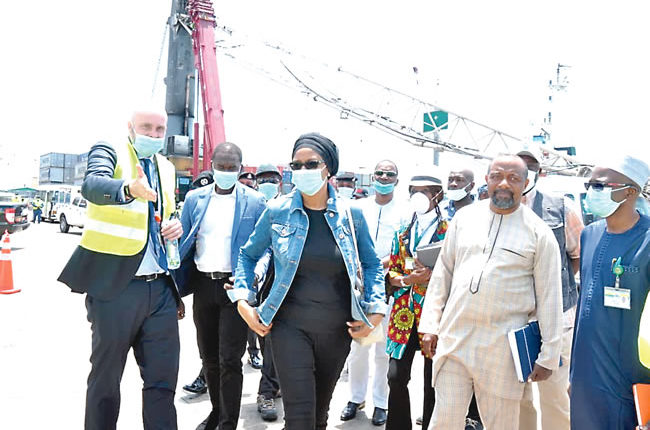 IN 2006, Nigeria embarked on the concession of port terminals to private investors in a bid to improve port services through private sector investment and expertise, and to free government from huge financial investments in the port sector. The port reform of 2006 saw the emergence of globally renowned multinational terminal operator, APM Terminals, as the preferred operator of the 1,005meters quay length Terminal ‘A’ facility at the Apapa Port, Lagos. Prior to the port reform, port operation in Nigeria was characterized by lengthy bureaucratic processes and bedeviled with obsolete port equipment which led to lengthy vessel turnaround time.

With the emergence of APM Terminals in what is called a Landlord port model, where the Nigerian Ports Authority (NPA) oversights the operators in a landlord capacity while the operators meet their financial obligations to the NPA as tenants, huge investment over the years has changed the narratives at Nigeria’s busiest container terminal.

APM Terminals took over the concession of the Apapa Container Terminal in 2006. In 2011, a $135 million investment was announced for infrastructure and handling equipment, modernisation of the terminals IT hardware/software systems, and additional capacity. In 2016, additional four Rubber Tyre Gantries (RTGs) increased the total RTG in the terminal to 23. In 2020, two new Mobile Harbour Cranes were acquired by the container terminal operator as part of an investment of USD80 million for the year 2020-2021, bringing the total investment by the company in Apapa since 2006 to USD438million (about N184billion), which is the highest by any private terminal operator in Nigeria. This has resulted in significant improvements in productivity, with zero waiting time for vessel berthing.

“The additional investment we are making is to handle the increased trade volumes into Nigeria. Trade in Nigeria is growing due to the many favorable efforts and policies of the Federal Government of Nigeria including, but not limited to, the policy on ease of doing business; stabilization of foreign exchange; closure of the land borders which has increased the use of our sea ports; and diversification of the economy,” he said.

Since it started operating the terminal, APM Terminals has leveraged its more than 100 years of industry experience of designing and building high-quality container terminals to transform the 55-hectare and 1005m quay length facility. Today, APM Terminals has improved the capacity of the Apapa port container terminal from a mere 200,000 TEU per annum in 2006 to 1.2million TEUs.

The concessionaire has transformed the terminal into a modern and efficient terminal, resulting in more capacity for trade and higher vessel productivity. This has made shipping lines deploy bigger vessels (e.g. WAFMAX vessels), and increase service frequency to the Apapa port. The economy of scale has enabled shipping lines to offer Nigerian shippers competitive rates, thereby increasing Nigeria’s foreign trade, both in terms of volume and value, and also helping to boost the country’s GDP and employment opportunities.

An impact assessment study conducted by a consulting firm, Quantifying Business Impacts on Society (QBIS) in 2018, shows that the operation of APM Terminals in Nigeria created a total turnover of around USD610 million (N186.05 billion) per year to the Nigerian economy from 2013 to 2016.

The main objective of the study was to assess the socio-economic impacts and value-addition of APM Terminals’ operations in Africa’s most populous nation and largest economy. The study focused on APM Terminals’ investments in Nigeria from 2010 to 2016.

The study also reveals that the operation of APM Terminals has impacted positively on trade in Nigeria, leading to an increase in the country’s manufactured export by up to 15 per cent, corresponding to around USD0.5 billion (N152.5 billion) in the period from 2006 to 2009.

In spite of the huge investment profile of APM Terminals which has impacted positively on Nigeria’s volume of trade, port users, like the proverbial ‘Oliver Twist’ have continued to ask for more, lamenting that the container port operator needs to do more in container transfer aspect.

In the words of the Vice President of the Association of Nigerian Licensed Customs Agents (ANLCA), Kayode Farinto, “APM Terminals has not done enough in the area of container stemming to bonded terminals.

“This is one of the issues that will keep bedeviling port operations in Nigeria if the appropriate authorities don’t wake up from their slumber. APM Terminals has already informed me that my six containers have already been stemmed to a bonded terminal for Customs examination, but why has the containers not been moved? Obviously, somebody somewhere is waiting for me to activate panic mode, and part with some money before they will be moved.

“Despite informing me that my six containers will be transferred to a bonded terminal for weeks now, the containers are still lying down there inside APM Terminals because somebody somewhere wants me to come and settle them or request to pay transfer charges. Don’t forget that the extra days the containers spend inside the APM Terminals are levied under storage charges. Is it my fault that my containers have not been transferred as requested by APM Terminals? Is anybody expecting me to come and pay transfer charges when I didn’t ask or request for any container transfer? This and many more issues are areas we expect APM Terminals to buckle up and live above board. Yes, we know they have invested so much in port operation, but that should reflect in the way they deal with their customers.”