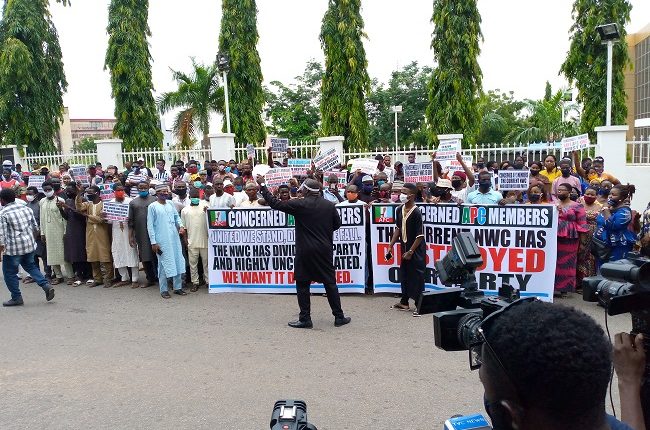 The group said the national working committee has since 2015 been undermining the legacies of President Muhammadu Buhari which they said surpassed those in administrations before it.

The youth group said the National working committee of the APC has been working against the President instead of supporting him and urged leaders of the party like Bola Ahmed Tinubu, President of the Senate, Ahmed Lawan, and Speaker of the House of Representatives, Femi Gbajabiamila.

Coordinator and spokesman of the group, Comrade Okpoku Ogenyi, also urged the national executive committee (NEC) of the All Progressives Congress to immediately begin the process of the dissolution of the extant working committee.

He said the All Progressives Congress as a party has lost about seven states to the opposition Peoples Democratic Party (PDP) making the party lose ground and reducing her strength nationally.

Ogenyi who addressed the media at the national secretariat of the APC said the activities of the NWC has been distracting the President when they should support her activities.

According to him, “We are here to address the frivolous activities of the NWC of the APC as concerned members of the party to address the issue of great national importance affecting the soul of the APC.

“The successes of the APC since 2015 are being bastardised and the legacy of PMB is undermined while the NWC has caused the APC to lose 7 states to the opposition dropping its membership by state from 24 to 17.

President Buhari is being distracted on a daily basis by the very leadership of the APC that should support him. Therefore, we call on NEC to call for a meeting and dissolve the NWC immediately.

“We also call on President Muhammadu Buhari, Senator Ahmed Bola Tinubu, President of the Senate and Speaker of- Federal House of Representatives to support the dissolution of the APC National working committee.”

He said to continue to have this NWC will amount to sending the party to oblivion following the especially as it has already led the party to losing seven states to the opposition.

Before the protesters arrived the APC secretariat to register their grievances calling in the dissolution of the NWC, the Ajimobi faction of the party had sworn in Mr Worgu Boms as a replacement for factional chairman of the party, Victor Giadom.

Worgu was sworn in as Deputy National Secretary to join the Ajimobi faction of the APC National working committee of the party.

It would be recalled that the Ajimobi faction presently led by Hilliard Eta had called on the South-South region to send in a nominee to fill the space of Victor Giadom whom Hillard said had resigned from the party to contest the 2019 election in Rivers State.