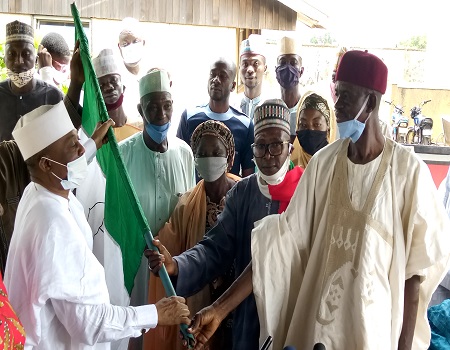 Members of the All Progressives Congress (APC) in the Kwara North senatorial district of Kwara State, on Thursday, decamped to the opposition Peoples Democratic Party (PDP) in the state.

The decampees, numbering about 10,000 are said to cut across five local government areas of the senatorial district, while their leaders attended the declaration in representative capacity to observe coronavirus protocols.

The aggrieved former APC members had last week in a statement announced their defection plan and they made good that decision yesterday at a brief ceremony at the PDP state secretariat in Ilorin-Ibadan.

Led by their coordinator, Alhaji Manzuma Abdulmalik Kawudogo, the decampees said that they decided to leave the ruling APC because of conflict and crisis among party leaders and members, allegedly caused by non-adherence to the party’s constitution.

Alhaji Kawudogo, who said that political battle was keen among the members, added that the development did not allow for growth but decline.

He said party members were de-enfranchised, miserable and no longer had sense of belonging due to unfulfilled campaign promises.

“Along the line, the centre cannot hold and things fell apart as a result of injustice, lack of fairness, recognition and sense of belonging to the party members,” he said.

Kawudogo, who said that the next local government elections would mark gradual extinction of the ruling APC from the state to oblivion, added that, “After waiting for a year, we discovered that the truth has prevailed, necessitating our movement as against compromising our principle. It is high time for us to maintain our clear noble principle towards bringing positive changes and betterment to our people.

Welcoming the decampees, the PDP state chairman, Engineer Kola Shittu, described the development as unprecedented, assuring the new members that they will enjoy existing privileges in the party without discrimination.

“We’re not surprised with the development due to unfulfilled promises of the present administration in the state.Doors of our party are wide open just as our umbrella is big enough to house every citizen of the state,” he said, adding that the PDP is determined to better their future.

Concurring with decampees claims of alleged non performance by the APC- led government in the state, Shittu said: “if our party had won the last gubernatorial election in the state, by now workers in the state would have started enjoying the N30,000 new minimum wage in fulfilment of our agreement with the organised labour in the state.”

“We should take our future in our hands. I’ve directed party leaders across the state to open new register and issue memberships cads to new members so that registration at ward levels is done to ensure that nobody is left behind,” he said.