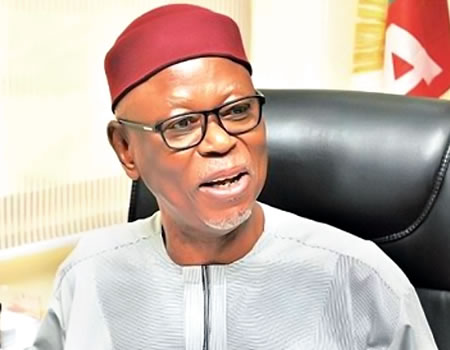 The National Chairman of the All Progressives Congress (APC), Chief John Odigie-Oyegun, has declared that the recommendations of the Governor Simon Lalong of Plateau State-led 10-man Technical Committee would lay to rest the ghost that has been hovering over the leadership of the APC.

Oyegun made the declaration on Friday in Abuja when Governor Lalong submitted the report of his committee to the National Working Committee (NWC) of the party.

The committee was inaugurated on Tuesday by Chief Oyegun.

It was mandated to examine the observations of President Muhammadu Buhari at the meeting of the National Executive Committee (NEC) held last month and make far-reaching recommendations.

President Buhari, at the meeting, frowned at the February resolution of the organ of the party which granted a year tenure elongation to the NEC and the state chapters.

Submitting his committee’s report, Lalong said he was hopeful that the recommendations, if implemented, would go a long way in resolving the seeming intractable crises confronting the ruling party.

He revealed that his committee got pressured by the contending camps within the party.

“We concluded this report yesterday (Thursday). This report was accepted by all our committee members, including those that have travelled back to their destinations. We did our best within a short time to ensure that we get the report ready within the accepted time so that this party can move forward.

“The task appeared not easy when it was given to us but with God on our side and the very wide consultations we made, this report has solved most of the problems that we were thinking were within the APC. So, that is to tell you that there is democracy in the APC.

“We looked at the meeting of February 27; we looked also at the passion and the commitment of Mr President towards keeping the party one and also cohesive and so at the end of the day, we made far-reaching recommendations. We noticed that there were different interests, which is quite usual when you have a party like this that is progressive and those interests were genuine but at the end of the day, we were able to marry those interests so that the party can move forward. So, in this report, you will see a lot of it.

“The report also contains recommendations on certain issues that we think the party should do immediately. And one of them you have already started. If these recommendations are going to be useful within the shortest time, the party must summon a NEC meeting. Already, we have received notices of NEC meeting for Monday, which is also in line with our recommendations and we want to assure you that at the end of the day, APC is coming back to life,” Governor Lalong said.

In his response, ChiefOyegun thanked the committee for its diligence and expressed confidence that the recommendations would lay to rest what he called “the ghost that has been hovering over the leadership of the APC.”

He said, “I thank you for the zeal and seriousness. I insisted that the report of your work was time-sensitive. We shall unite the party and face the events that will unfold in the next few days. We are going to work all weekend to ensure that it is digested before the conclusive meeting of NEC.

“I hope next meeting of NEC will address all issues before we move into the electoral mood.

“I thank you on behalf of the NWC for the dedication to this job.”

Lessons from dùndún Seller: Determinant of the fate of any economy

NANS to FG: Allow us to go home and vote