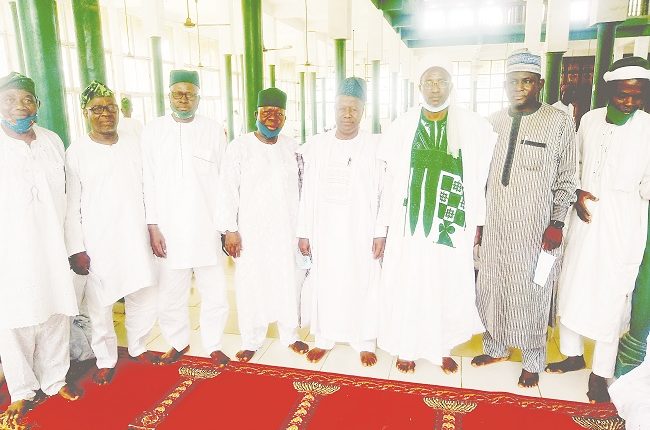 THE Ansar-Ud-Deen Society (ADS) has described the chairmen of the Oyo State Civil Service Commission and Oyo State Independent Electoral Commission (OYSIEC), Alhaji Kamorudeen Aderibigbe and Alhaji Isiaka Olagunju (SAN), as exemplary Muslims and sources of pride and joy for the organisation and the entire fold of Islam.

The missioner of the faith-based organisation in Oyo State, Dr Bashir Olanrewaju, made the remark last weekend at the organisation’s quarterly asalatu which was also used as a reception for the two government officials.

Dr Bashir Olanrewaju said the event was meant to celebrate the duo for their achievements in their different callings and to commend them for being worthy ambassadors of Islam.

He said: “This is about celebrating people that Allah has wonderfully blessed. We need to be proud of them. We need to express our joy for having such personalities within the fold of Islam.

“For them to have attained such exalted positions in the administration and governance of this state is a thing of joy, which we must ever be proud of.

“We decided to honour them with this quarterly and special asalatu to express our joy that Allah has given us such very important personalities who are Muslims, who are our pride and role models.”

The cleric urged other Muslims whom Allah has placed in various positions in the administration of Nigeria as well as the various states to realise that Allah is watching them.

In a remark, Alhaji Aderibigbe thanked Ansar-Ud-Deen for the honour and expressed his delight to identify with such an organisation which he said had impacted the society positively in various ways.

“I feel highly elated because the Ansar-Ud-Deen Society is a first class Muslim organisation. They have been doing well in many areas, including education and health. Ansar-Ud-Deen is a very good organisation and I am happy to associate with them,” he said.

He urged Ansar-Ud-Deen members and the entire people of Oyo  to encourage their children and wards to be hardworking so that they could benefit from the current administration in Oyo State led by Mr Seyi Makinde which he said was out to empower the youth in all ramifications.

“The governor has given us the leeway to use the template of merit and competence. If you have competence, then you have a good chance of benefitting hugely under this administration,” he noted.

Alhaji Aderibigbe described Governor Makinde as an equitable leader who put a high premium on competence and fairness to all.

Also, Alhaji Olagunju said: “I feel delighted. I am impressed by the organisation. It is a well organised society. The love they have shown us is very commendable.”

He said he also viewed his presence at the event as part of OYSIEC’s process of building the trust and confidence of the people in the electoral process in Oyo State.

According to him, by January 2021, the timetable for the forthcoming local government election in the state will be released.

He promised that the election would be conducted faithfully and conscientiously to reflect the will of the electorate.

“Since we came in, we have been visiting stakeholders. The message is that the people of the state should be interested in the forthcoming local government election and ensure that they have their voter’s card ready and participate in the process so that we can have a free, fair and transparent election.

“On Election Day, Oyo State people should come out en masse and vote, and I am assuring them that by God’s grace, that election will be transparent, credible, free and fair.”

On Ansar-Ud-Deen clocking 97, having been founded on December 21, 1923, Dr Olanrewaju said: “The achievements are there and they are visible to the people. How bountiful Allah’s blessings are on the organisation in terms of achievements in the education sector, in terms of producing illustrious citizens who are today a source of pride to not only Ansar-Ud-Deen but to Islam generally.”

The surprise visit made on Friday night by the leaders of the ruling All Progressives Congress (APC) to former President Goodluck Jonathan at his residence in Abuja triggered a stir in the major political camps, resulting in at least four possible theories..Ansar-Ud-Deen honours  Ansar-Ud-Deen honours

I will use my new status as Wakiliyar Mata to promote religious peace, women…