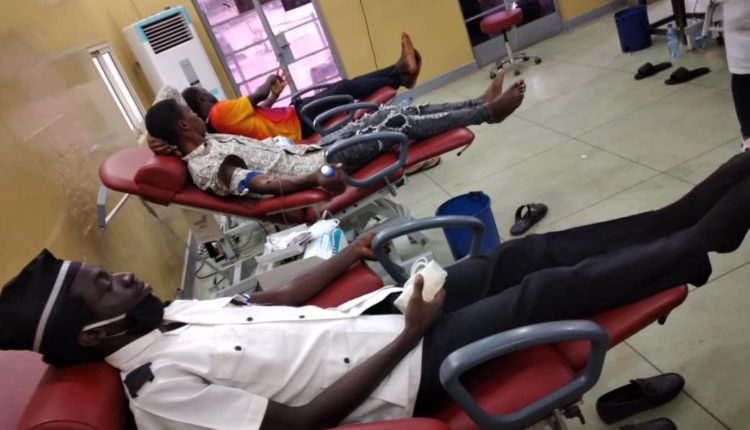 MEMBERS of the Oyo State chapter of the Ahmadiyya Muslim Youth Organisation, formally referred to as Majlis Khuddamul Ahmadiyya, have donated 163 pints of blood to the blood bank of the University College Hospital (UCH) and the National Blood Transfusion Service (NBTS), both in Ibadan.

The state president of the organisation, Hussein Muftau, stated that about 500 pints of blood had been donated this year alone despite the challenges that had come with the year.

Muftau, however, advised other youths and youth organisations to jettison immoralities and emulate the culture of service to humanity and channel their energies to activities that could enhance their development.

“We have cultivated the habit of serving humanity in different ways and blood donation is one of these ways, as enjoined by Allah in the Glorious Qur’an and teachings of the Holy Prophet Muhammad. By this, we have counted service to humanity an integral part of our faith,” he added.

Mr Nadeem Ahmad, a missionary of the religious group, stated that the Ahmadiyya Muslim Community was known for selfless and humanitarian service worldwide through the establishment of hospitals and schools and sinking of boreholes across the globe with the core motive of spreading the pristine teachings of Islam.

Ahmad said that since Ahmadiyya establishment in 1916 in Nigeria, all and sundry, irrespective of religion, trait and background, had felt the impact of the jama’at.

At UCH and NBTS, the blood donation exercise has taken place for more than 4our decades. The youth group, elders’ forum and the female wing of the organisation have also been donating blood every three months to save lives.