Politics
By KUNLE ODEREMI and TAIWO AMODU On Sep 28, 2022 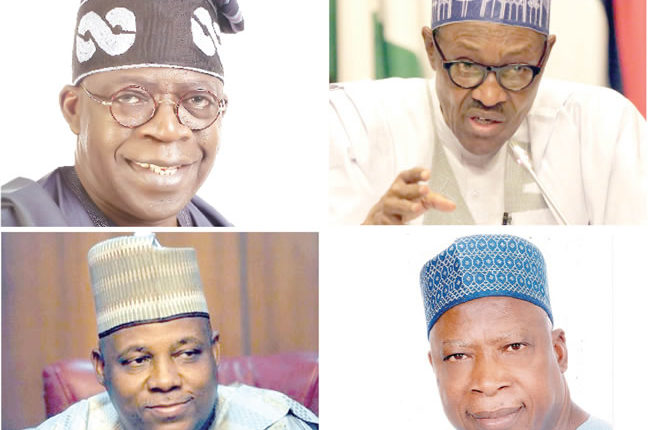 The disquiet in the All Progressives Congress (APC) over the composition of its Presidential Campaign Committee (PCC) is a climax of the seething anger among members of the various power blocs and other tendencies within the party. KUNLE ODEREMI and TAIWO AMODU write on how the situation aborted the inauguration of the campaign council slated for Wednesday.

Some chieftains have hinted that all is not well within the ranks of the All Progressives Congress (APC) over the compilation of membership of its presidential Campaign Council (PCC). There have been claims about a sharp division among the major power blocs on who should make the list. But, many of the critical stakeholders have preferred to discuss the crisis in hushed tones for fear of a possible backlash. In fact, a key member of the think-thank of the APC presidential team had confided that the leaders were managing the friction in such a manner to avoid it getting out of hand. While presidential candidate of the party, Senator Bola Tinubu has embarked on foreign trip, a source said some leaders were waiting for Tinubu to return to calm some frayed nerves over composition of the list.

Another source blamed some governors elected on the ticket of the party as being behind the cold war, especially those who were said to have lost out in the bid to be chosen as running mate to Tinubu for the 2023 general election.  The list of other power blocs that felt aggrieved also included aspirants that were not successful at the primary and convention that produced the standard-bearer of APC for the next election, and the convention that elected national chairman. The development, coupled with other outstanding issues, heightened tension and suspicion in the process leading up to composition of the PCC.  Sources said the power play became a big challenge for both the leadership of the party and the camp of the candidate. The mutual suspicion was said to have been responsible for the delay in releasing membership of the PCC, despite the occasional attempts by the authorities to downplay or deny its release.

The media was abuzz with reports in the last two weeks that the APC will hit the ground running from the September 28 date slated for the commencement of campaigns for the general election.  Director, Media and Publicity, APC Presidential Campaign Council, Bayo Onanuga had disclosed that the campingn would commence with special prayer and peace walk. He added that all nominees in the campaign council would be issued their letters of appointment same day after the event. Consequently, he had asked all members nominated to serve in the various directorates to report at the campaign headquarters on Wednesday, September 28, 2022 at 8.00am. He explained that nominated members were required to participate in the special prayer sessions marking the commencement of the 2023 presidential election campaigns, to be followed by a peace walk immediately. He added; “All nominees will be issued their letters of appointment same day. On behalf of the chairman of the campaign council, President Muhammadu Buhari; our candidate, Senator Bola Ahmed Tinubu and his running mate, Senator Kashim Shettima, we congratulate all members of the campaign council. We know this is a call to serve our great party that will demand total commitment and sacrifice from all of us. It is the council›s strong belief that all members will work hard to deliver a resounding victory for our great party in the 2023 presidential election.“

A few hours after the announcement, the PCC said the inauguration of the PCC had been postponed indefinitely fueling the issue about the crisis in the ruling party. It was learnt that  part of the statement announcing the postponement aggravated the hide and seek between the PCC and some members of the National Working Committee (NWC) who perceived the actions of the PCC as undermining laid-down principles in the structure and running of the APC. Their position is that the PCC had usurped the duty and function of the APC leadership, especially by hijacking preparations for the campaign. They cited the decision by the PCC to issue letters to those nominated into the body as one of such abuse of process and procedure that should not go unchallenged.

The seriousness of the power struggle among the various tendencies within the ruling party at the threshold of the takeoff was expressly validated by the media team of the PCC. In a move to douse the increasing tension and rupture, it categorically said the complaints of the aggrieved power blocs were receiving attention. These included the power centre which comprises APC governors,  whose nominees were not given places in the PCC, whereas Senator Chimaroke Nnamani of the leading opposition Peoples Democratic Party (PDP) made the list. There was also the claim by members of the APC National Working Committee (NWC) and governors  that they were not carried along before the list was made public. But, Onanuga, in a statement appealed to those uncomfortable with the list to exercise patience and understanding. “The council also assures our esteemed governors that the secretariat of the council has not jettisoned the names submitted by them,“ he said. Onanuga also clarified that the Senator Chimaroke Nnamani was included on the list as a supporter of TInubu.

The 422-member PCC unveiled, has President Muhammadu Buhari as chairman, Tinubu and national chairman of the party, Senator Abdullahi Adamu as deputy chairmen, 1 and 2, respectively. The name of  Vice- President, Yemi Osinbajo, who competed in the presidential aspirant that produced Tinubu at the last June Convention, was missing along with the name of the SGF, Boss Mustapha. But, the Presidency explained that Osinbajo and Mustapha were not included in the list so as to: to keep the government machinery running while the campaign for the general election gathers momentum.  Minister of Labour and Employment, Festus Keyamo, who doubles as the spokesperson of the APCPC justified the exclusion of Professor Osinbajo in the campaign team. Keyamo, in a statement, said President Muhammadu Buhari specifically gave the directive that the two should not be included in order not to undermine the governance of the country and administration of government.

Some circles are also curious about the seeming obscure roles assigned to other major gladiators that had been part of the pillars of the party in past elections and in the administration of the government. The names include two term Rivers State governor and former Minister of Transportation, Rotimi Ameachi, who came second at the presidential convention, listed as an Adviser on Infrastructure, whereas he was the Director General of the APC Presidential Campaign Organisation in the 2019 general election.  Other chieftains of the party included in the PCC is former Minister of Niger Delta, GodswillAkpabio who was the first to announce his withdrawal from the race at the presidential convention, who is Vice Chairman, South South in the team that has national vice chairman, South South, Victor Giadom, an ally of Amaechi) as deputy zonal Coordinator in the zone while Senator OvieOmoAgege, Deputy Senate President will coordinate campaign in Delta State.

Similarly, another ex-presidential aspirant and incumbent Senate President, Ahmad Lawan was designated Senior Adviser, Strategic Planning. Former Ogun governor and another presidential aspirant, who later stepped down for Tinubu at the Convention ground, Senator Ibikunle Amosun was assigned responsibility of Adviser, Contact and Mobilisation. Former Minister of Science and Technology, Ogbonaya Onu, who also contested for the presidential ticket will join the campaign train as one of the campaign patrons. Serving  governors are the coordinators of the campaign in their respective states while in states where opposition parties are in control, the APC governorship candidates assume the role of state coordinators. But, members of the APC National Working Committee (NWC) perceived to critical of ‘marginalisation in the campaign team were made deputy coordinators and regional coordinators. Thus, deputy National Chairman (North) of the party, Senator Abubakar Kyari, is listed as Deputy Regional Coordinator (North, just as Jigawa State Governor, Abubakar Badaru is the Regional Coordinator (North).

Weeks after the choice of a former governor of Borno State, Senator Kashim Shettima as running mate to Tinubu, there exists a raging controversy. The issue of same faith ticket has pitched the party against some of its notable gladiators, who believe the choice undermines the sensitivity and sensibility of a critical section of the population of the country. Apart from Christian organizations, including the Christian Association of Nigeria (CAN) and the Pentecostal Forum of Nigeria  (PFN), APC stalwarts like former Speaker of the House of Representatives, Honourable Yakubu Dogara and a former Secretary to Government of the Federation (SGF), Babachir David Lawal, have remained resolute in their cry against the Muslim-Muslim ticket  In the views of Lawal, the same faith ticket cannot be justified on any ground, as he claimed that it was a grand design to marginalise Christians in the country.  Part of the plot, he alleged, was that a power sharing formula was already on ground skewed against Christians and a certain geopolitical zone.  In a statement he released in Bauchi, the ex-SGF said: “The reality is that, for each minute that this same-faith ticket duo have  spent on their Goebellsian propaganda, they have ended up spending several hours more trying to rebut the controversies that they themselves create in the process….But belying this posture is the reality of their true intentions not to have any roles for Northern Christians in their government. The unarguable  fact is that they intend to offer nothing of significance to any Northern Christian in an APC government anticipated to be led by Bola and Kashim. The reality of their zoning arrangement is that the North-East subregion is already out of the equation for any other posts because it has the vice presidency while the North Central too is out because they have the party’s national chairmanship. The other key positions, The Senate President, the Speaker, the Secretary to the Government of the Federation and Chief of Staff to the President have been zoned to the North-West, South-South, South-East and South-West regions respectively. Besides, we all know that there is and will be no ranking Christian Senator or House of Representatives member from the North-West that could occupy the seats of Senate President, Speaker or even their Deputies. In any case, it is an open secret that they never allow Christians to occupy such positions in the North-West Zone even if there is a qualified Christian.”

Members of the PFN are also furious over an alleged bid to hoodwink a section of the Christian community over the  controversy surrounding the same faith ticket of the APC for the general election. The deputy national secretary of the body, Bishop David Bakare, disowned a shadow group of Christian leaders that purportedly met with Tinubu, saying:  “I am speaking to you officially and authoritatively that the ranks of the Christian community and of course, the PFN, which I represent is not broken at all. The Pentecostal Bishops Forum of Northern Nigeria is not known to the PFN. The forum does not have any affiliation or relationship with the PFN that is registered with the government of this nation. On same faith ticket, we still stands as it was in the beginning and we have not, for any reason, shifted our position on that matter.”

With the different camps insisting on their demands, coupled with the decision of Tinubu and his running mate to embark on a trip to London, the ruling party seems cut in another quagmire less than five months to the general election.

Legal questions over policing beyond the police