Anambra: Buhari told me he’s not in support of emergency rule declaration ― Obiano 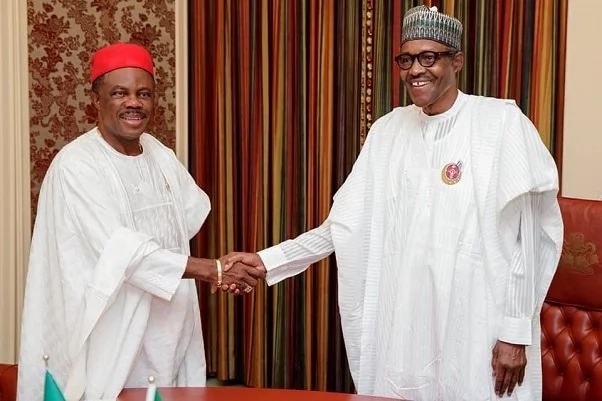 Anambra State governor, Willie Obiano, says he has reported the Attorney General of the Federation, Abubakar Malami to President Muhammadu Buhari for suggesting a possible declaration of emergency rule in the state, saying that the president was not in support of the action.

The governor, who met with the president in his official residence at the presidential villa, Abuja on Thursday, told correspondents afterward that Buhari has assured that he was only interested in a free and fair election in the November 6 governorship exercise in the state, citing the example of his (president’s) numerous attempts to win an election until his fourth try.

Obiano described Malami‘s statement as unfortunate and wondered why he had not contemplated the imposition of emergency rule in northern states where he observed there had been more killings.

He said he would call the Attorney General to express his mind to him over the suggestion as he maintained that apart from the recent security crisis, Anambra state had been the most peaceful in the southeast.

“But if people in his party are going around making insinuations, using his name to do things, the president clearly told me that he does not support that full stop.”

“I also reported that to the president and this is not in the books for the president because he knows that Anambra has been the safest state in Nigeria for seven years plus.

“These invaders from outside Anambra state, from the neighbouring towns, we are going to deal with them. We’re already working. There’s nothing.

“Even to contemplate the state of emergency is unfortunate. Look at what is happening in the north; they kill dozens every day. Because less than 15 people were killed in Anambra in two weeks, is that a reason for somebody to call for a state of emergency? That’s a very unfortunate comment by Malami.

“I will call him to express reservation on those kinds of comments. He shouldn’t try that.

“Anambra is doing well, and don’t forget that Malami is on the National Campaign Committee for the APC candidate. So, if that’s their strategy, then they failed already. Come to the ballot box, APGA will win and win hands down.

“They are trying to see how they can destabilise us. No! APC has no room in Anambra. There’s no party called APC in Anambra. Anambra is APGA.”

The governor observed that what was happening in Anambra state could not be compared with the situation in the northeast where a state of emergency had not been considered.

He argued: “Well, when you have malaria and when you have cancer, they are two different treatments. What we have in Anambra is malaria. So, you don’t have to use a sledgehammer to kill that. We are not near, in terms of confusion and security challenges, compared to Zamfara and co. So, they are not good examples.

“The Army, Police, Navy, other arms-bearing people should consider the quantum of force to use. As a strategist, you don’t sit down here and order the army to carry the whole army in Nigeria to go to Anambra.

“In summary, what I’m saying is what is happening in Anambra and this election that must hold. The crisis and challenges are far from being close to challenges in the Northwest and in the Northeast, as the case may be.

“The guarantee we are given for this election is that this election will hold, we’ll have enough security to back the people, and APGA, Professor Chukwuma Soludo, will be the next governor of Anambra state.”

While reacting to the assertion that his government might not be able to protect lives and property as feared by Malami, he stated: “Let me take the comment on the Honourable Attorney-General of the Federation. The comments by Malami are very unfortunate. He shouldn’t have made that assertion at all because we don’t have any challenge in Anambra.

“What happened for the period of two weeks is just a flash in the pan. Anambra has always been the safest state in Nigeria under my leadership for seven and a half years. So, this little hiccup will not warrant his comment there.

“Why didn’t he make those comments in Kaduna, in Jos, Imo State, in Zamfara? Why is he making that kind of assertion and we have an election by the corner? There’s no reason to make that assertion.”

He further said: “What I can tell you is that I’m emboldened by meeting with the president today to confirm to you that Mr President is a fair man, he believes in a free and fair election, he doesn’t want intimidation. He used that word to me; he said he does not want anybody to intimidate anybody, that he respects everybody.

“He gave me an example that he ran for presidency three times, that it was only on the fourth time he won. So, why should people be forced to do what they don’t want to do?

“So, what these members of his party are doing, the president does not support that. I can tell you that.”

The governor also rejected claims that members of the ruling All Progressive Grand Alliance (APGA) in the state house of assembly had defected to the All Progressive Congress (APC), saying that what happened was that the members were given N100 million each to join the APC.

He said they have, however, remained in APGA, adding: “Any time, any day, there’s no other party in Anambra. Only APGA? is there’s no APC. It’s not true (that lawmakers defected), It’s not 20 members of the House of Assembly.

“But let me tell you, it’s a ploy. Those people that went to APC now, they went to collect money because they saw the additional money, N100 million each, they are still APGA, they are giving us information on what is happening in APC.”

Governor Obiano asserted that Anambra state was doing well, citing some of the achievements of his administration.

He stated: “We are doing well already. Part of the reasons why I came here is to brief some security agencies on efforts I’ve made and to solicit some support in some other areas; the Army, the Navy, the Police in particular. The president also noted that and will give further directives.

“We are getting more boots on the ground, we’re getting more equipment and I believe in less than two weeks, all these things will be over. We’ll overwhelm and conquer all these miscreants that came from other states nearby to come and harass the Anambra people. Let me stop by saying that they are from neighbouring states.

Responding to inquiries on the recent killing of Dr Chike Akunyili, he affirmed that his administration had offered the sum of N20 million for information leading to the arrests of perpetrators.

“I believe that N20 million is good enough for people to give us information and as soon as we get that information, we are going to deal ruthlessly with whoever those people are,” he stated.

He said after briefing President Buhari on the political situation in Anambra state, Buhari assured that the November 6 governorship election would hold.

According to him, “after briefing the president on the state of political activities in Anambra, he reassured one more time that election will hold in Anambra State and that the election will be free and fair.

“The president has always made that point and to testify to that. He told me the same during my re-election and APGA won, 21 over 21.”