Tribune Business
By Justice Nwafor On May 5, 2021 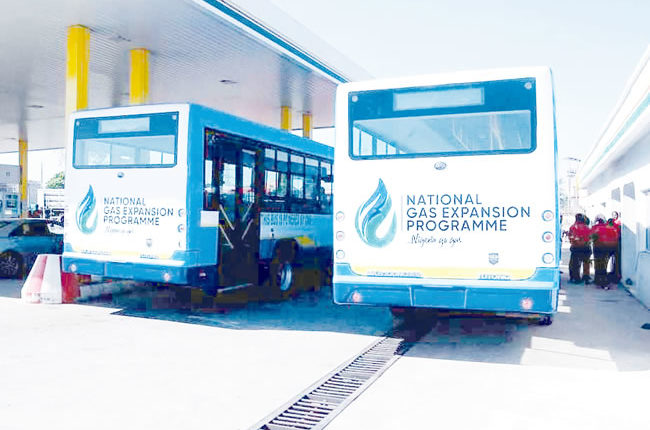 The programme is part of the country’s gas master plan which aims to explore its huge gas reserve — the highest in Africa and the 8th highest in the world — which, sadly, has been used sub-optimally. The launch marked the official entry of the three alternative fuels: Liquefied Petroleum Gas (LPG), Compressed Natural Gas (CNG) and  Liquefied Natural Gas (LNG), as options for transportation, industrial and domestic use.

Mr Sylva said the programme is meant to drive gas utilisation in the country with an underlying aim of opening up new trajectories for development and employment generation.

Answer to the call for diversification?

Crude oil prices at the international market are not stable and this affects Nigeria adversely. Issues as far-flung as subtle crude oil war between any of the top five producers or as huge and close as a pandemic like the Covid-19 affects crude prices. And Nigeria, which relies heavily on crude sales for its foreign exchange earnings and revenue, is always hit hard.

In view of this, calls have been made for diversification away from oil. While some think gas is not too far from oil, it presents a viable alternative and this informed the federal government’s decision to launch the initiative, Mr Sylva said.

Deregulation of the Premium Motor Spirit (PMS) market is a big issue in Nigeria. It’s so deep a problem that it has become a tool with which to score political points or play opposition politics. And the government, past and present, have failed to confront it head-on. In 2012, the government of the then President Goodluck Jonathan made attempts to remove the subsidy. But the move met stiff opposition which later snowballed into the infamous occupy Nigeria protest. It would later become one of the major talking points during the electioneering campaign which ushered in the present All Progressives Congress (APC) led federal government.

About a year ago, the present government announced the removal of fuel subsidy, citing its inability to continue spending huge amounts on it. It actually came at a time when the crude price was low, so it didn’t bother most Nigerians. But as crude prices picked up, it started biting hard as the pump price of fuel started going north.

Then the government had to promise the organised labour, which had threatened industrial action, of remedial measures.

“This initiative is one of those promised measures to cushion the effects of the downstream deregulation that this government has to painfully implement,” President Buhari said.

This is to say it will make transportation cheaper and create new markets and enormous job opportunities for Nigerians. At an average of two million jobs per annum, the initiative will create not less than 10 million jobs in five years, the government estimates. 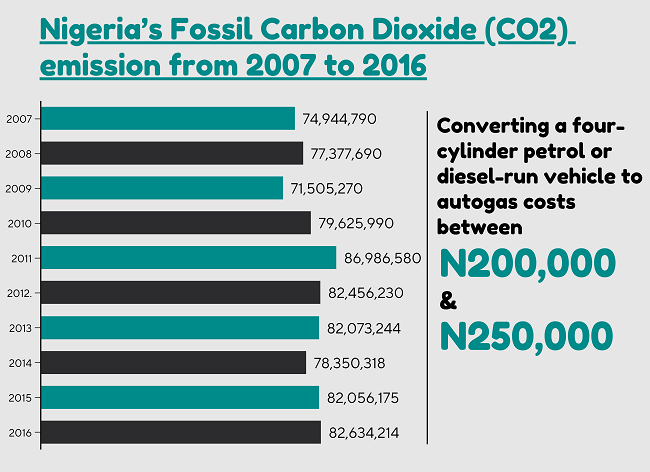 The President directed Mr Sylva to make more autogas-powered mass transit buses available to the Nigerian Labour Congress (NLC) to ease the transportation challenges Nigerians are facing”. At that time, a few were donated while a promise to donate 100 more was made.

Also, the Department of Petroleum Resources (DPR) ordered 9,000 filling stations nationwide to begin the installation of facilities for gas products. This is to meet the initiative’s target of converting over one million vehicles from running on petrol to running on autogas before the end of 2021.

Of these figures, the transportation sector contributes little below a third, especially in a well-populated city like Lagos which has high vehicle density (227 vehicles/km/day). The situation is exacerbated by old emission technologies (most cars are older than 15 years) which the vehicles use and the high sulfur content in imported diesel and fuel.

Even though the figures hover below one per cent of the global figures, its impact could cut deep in the face of the country’s many environmental challenges. For instance, a study found that carbon emission in Nigeria is capable of reducing life expectancy by 0.35 per cent, while a recent World Bank report said air pollution has led to 11,200 premature deaths in Nigeria.

In this complex, the government sees gas utilisation as a mitigation measure that could chart a green course for the country.  And, interestingly, reduce the rate of air pollution across the country and, in the long run, stop the crash of life expectancy and pollution-led deaths.

Environmentally, there is a consensus that autogas is a lot greener. UK’s Drivelpg puts it this way: “diesel is 29.2 per cent higher (in CO2 emission) than LPG while petrol is 26.8 per cent higher than LPG.”

Also, a study found that LPG is cleaner than petrol and diesel because it is composed of predominantly simple hydrocarbon compounds. “Compared with emissions from vehicles on petrol and diesel, emissions from LPG-driven vehicles contain lower levels of hydrocarbon compounds, nitrogen oxides, sulphur oxides, air toxics, and particulates,” it found.

But these lofty gains may not materialise as soon as expected in Nigeria.

Not the game changer yet

Nigeria one of the poorest countries  in the world. The world poverty clock says little below half of the country’s population — that is at least four in 10 persons — live in extreme poverty. What this means is that quality of life is low and most people find it difficult to have decent meals.

After the launch of the National Gas Expansion Programme and the National Autogas Roll-out Initiative, Mr Kyari, NNPC’s GMD, said the conversion of vehicles from fuel usage to autogas would be provided for free at designated NNPC fuel stations. This, he said, would encourage many Nigerians to embrace the initiative.

But less than 48 hours after, Mr Sylva would disagree with Mr Kyari and say that Nigerians would have to pay between N200,000 and N250,000 to have each of their vehicles converted. This became one of the hurdles that would duck the initiative.

Now, this is particularly significant because the average Nigerian auto user may not be able to pay this amount. Also, most Nigerians rely on the public transportation system.

In a city like Lagos with old and weak public transportation vehicles, as in other cities across the country, where most of the drivers don’t own the vehicles themselves, getting the real owners to spend such an amount at a go will be difficult.

In this complex, Dr Rabiu Suleiman, an oil and gas expert and the former Chairman of the Ministerial Steering Committee (SteerCo) of the Nigerian Gas Flare Commercialisation Programme (NGFCP) told Nigerian Tribune that patience is required. According to him, the focus now should be on large auto movers like the Dangote Group and popular transportation companies in the country. When competition sets in, the cost of conversion will become lower, then the average auto user can latch on it, he said.

On the other hand, there is still low awareness of the benefits of autogas. Some Nigerian auto users still believe that autogas is not safe for their vehicles, and they would rather stick to the devil they know than the angel they don’t know. Here, Dr Suleiman thinks more effort is needed.

A much bigger picture is safety. Most vehicles used for public transportation in Nigeria are either old and in poor shape or are poorly maintained. Conversion and utilisation of autogas for vehicles require very strict standards for safety.

For instance, in the US, vehicles converted to use autogas must be inspected for compliance with applicable Federal Motor Vehicle Safety Standards (FMVSS). The inspection must occur at the time of the conversion; every three years or 36,000 miles after the conversion, whichever comes first; and following any collision in which the vehicle was travelling at five miles per hour (mph) or greater. The emphasis is on safety.

Getting such or similar standards enforced in Nigeria would face huge challenges. Here’s why: most Nigerians have a palpable propensity to cut corners. Corruption is deep-seated. This would compromise the standards and process and endanger public safety. Also, agencies with such responsibilities as the Vehicle Inspection Office (VIO) and others lack the mechanisms to enforce the strict standards.

Policy inconsistency and poor infrastructure in Nigeria’s oil and gas sector would affect this initiative. For instance, when the initiative was launched, The NNPC announced it would provide free conversion for vehicles. Just a few hours later, Mr Sylva, the Minister of Petroleum Resources denied and said it would cost money to do so. What exactly do Nigerians and investors believe, given that the regulatory responsibility when it comes to gas and lies with the DPR.

On gas infrastructure, Dr Suleiman says more funding and commitment is required to drive the programme’s aim of making gas, especially cooking gas, available in every part of the country.

More interestingly, this is not the first in Nigeria’s drive to deepen gas utilisation in the country. A very bad example is the delay in the selection of successful bidders in the Nigerian Gas Flare Commercialisation Programme (NGFCP). The programme, which holds so much promise, is rotting away with heavy consequences for job creation, climate change mitigation and electricity generation.

Another not-too-good example is Nigeria’s inability to meet the self-set 2020 target of ending gas flaring in the country. Of course, the global target is to flare out by 2030 and Nigeria is a signatory to the Paris Agreement and has pledged to reduce its greenhouse gas emissions by 20 per cent by 2030 with an implementation period of between 2015 and 2030, according to the country’s intended nationally determined contribution.

One thing prospective investors watch out for is the cohesion and consistency of policy frameworks. And, sadly, this has, somewhat, been missing in Nigeria’s oil and gas sector.

Again, autogas, surprisingly, is not the entirely clean energy many think it is. There has been an intense debate as to the amount of methane released into the environment in the process of gas exploration and transportation and if it defeats its green goals.

Methane is a fast-acting greenhouse gas with enormous short-term impacts on the climate. But one thing has been agreed on: methane leaks virtually at all the stages along the gas value chain and its impacts are well documented. This is particularly disturbing because methane heats up the climate over 80 times more than an equivalent amount of carbon dioxide (CO2) in the first 20 years after it is released into the atmosphere. After 20 years most of the methane becomes CO2, which can last for hundreds of years.

Climate goals require the energy sector to be decarbonized by mid-century. This means that both coal and gas must be phased out. Replacing coal plants with new gas plants will not cut emissions by nearly enough, even if methane leakage is kept to a minimum. Current plans for gas production growth drastically overshoot climate-safe models and are a bridge to climate disaster, a recent study found.