An honour from the cradle of journalism 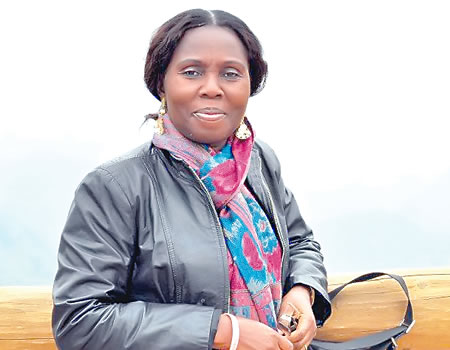 The Nigerian Tribune, founded in 1949 by Chief Obafemi Awolowo for the sole purpose of serving as the mouthpiece of the Yoruba, as well as a medium to showcase the welfare programmes of the sage and advertise the progressive politics that he stood for is published in English language and has its headquarters in the ancient city of Ibadan, Oyo State, south-western part of Nigeria.

Over the years however, Nigerian Tribune has not only lived its creed of establishment; it has gone beyond being a newspaper just for the Yoruba, and through informative and purposeful journalism, it has acquired an  image that has projected it into the national standard as a reliable source of news for the entire nation.

As the newspaper made a cross from the sectional ethnic newspaper of the Yoruba to its earned national status of noticeable news platform, it developed problems with some South-West politicians who believed in the sole motive of the regional political and economic agenda of the time, with the assurance of cashing in on the name of the sage, even when a few of them did not really stand for the ideals that he believed in. To them, the newspaper had taken a shift from being that of the “progressives”, and had been taken completely over by the closest rival, the “anti progressive” elements that the opposition represents.

In the midst of all these controversies though, the Nigerian Tribune has continued to progress in leaps and bounds; as the oldest surviving private newspaper, its reach nationally is second to none.

It is, therefore, an honor to have this communication outfit of note, deem it fit to honour Her Excellency, the First lady of Ondo State, Arabinrin Betty Anyanwu-Akeredolu, with an award, at its Platinum ceremony.

Arabinrin Anyanwu-Akeredolu is a woman of many parts who is passionate about women emancipation, the re-awakening of the girl-child and has taken it in her stride to keep making life better for both women and children alike.

Since her husband Arakunrin Oluwarotimi Odunayo Akeredolu (SAN), assumed office as the governor of Ondo State in February 2017, she has not hidden her passion for the economic emancipation of women. She has been supporting her husband with lots of lofty ideas on women and the girl-child.

Arabinrin Betty Anyanwu-Akeredolu, the aquaculturist Emeabiam-born woman from Imo State, is a woman of many parts.

A woman who is passionate about women emancipation, and the reawakening of the girl-child and has shown great commitment to making life better for both women and children alike.

Her many laudable life-changing programmes include:

This is an association that has been in existence for twenty two years. For those that have lost their loved ones to cancer, any effort geared towards saving people from the wicked fangs of the deadly disease will be worth the effort and human resources ploughed into it.

Arabinrin Betty saw the need to bring its awareness to the people because of the passion for mankind in her bowels. Since she started the nongovernmental organisatiom, it has gained so much prominence; therefore, it was not a surprise when she took off immediately Arakunrin took oath of office in February 2017

As it is, Arabinrin has taken it to more than a number of states. With passion and sincerity of purpose, BRECAN, an organisation that started with less than ten members in Ibadan, is now in Ondo, Lagos, Imo, Kwara, Abuja and Kogi, to mention but a few, with thousands of members. Its duty is to provide awareness for breast cancer, and in some instances, source funds for victims. Arabinrin Betty herself serves as motivation for many, standing as a beacon of hope and inspiration that breast cancer is not a death sentence, inasmuch as it is detected early. Her uncommon openness in confessing to having survived the dreaded disease twenty-two years ago, and sharing her travails without any prompting, yet still living a good life, is good motivation for all women.

In Nigeria, most first ladies are defined by the opulence around them, but for Arabinrin, her greatest concern for mankind remains the source of her imaginative creativity.

The greatest asset of any nation is her population. For any nation to grow, its human population must be empowered with the right education and skills. The thrust of BEMORE programme is hinged on the desire of Arabinrin to produce in womenfolk a productive population that will be of economic value to the society. BEMORE, a formative concept that speaks to the consciousness of women and girl child that they can be more of whatever they are, is one initiative of Betty Anyanwu-Akeredolu whose impact has a far reaching effect. In the over two years of her husband’s stay in office, she has created a summer boot camp during the long vacation, which has trained over 1000 secondary school girls in ICT and solar paneling. The focus is to have young girls see a future in mathematics, science and technology and shift their minds towards a future in that field.

Many of these girls are already performing exploits in the field of science, the pack of which is led by Tosin Ehinmosan, who represented the foundation in far away Iran and came back winning laurels in alternative energy generation.

Marvelous Jegede is yet another 15-year-old girl, who after the boot camp, went ahead to light her home which had been in darkness for four years, building solar panels.

The boot camp also has talents detected in the girls during this period, as Arabinrin Betty believes in bringing out embedded talents in the girls, along with the academics they need to learn.

Seun Elebimoyo, a songstress with a powerful voice detected at the camp, is already in the studio, and will soon have her debut ready.

Akeremale Funmilayo, a young girl of 12, also discovered at the boot camp, is today the youngest breast cancer advocate in the world. The effect of her advocacy against breast cancer is best seen, as she stands to teach self breast examination to all that crosses her path. The impression left by her teachings is one that lives a long while on the mind.

The multiplier effect of this Bemore Foundation in years to come will certainly produce a population of skilled, educated and determined women in our society.

Every notable name in the world of sports became right from age eight. In improving the interest of the children in sports, this woman of many parts began a summer tennis club that trains children of ages 3-17years in the art of lawn tennis. Catching them young, you will say?

Several talents have been discovered in these two years, and this has led to the formation of the Arabinrin Tennis Club. The club has participated in tournaments, and gone beyond the group stage in qualification.

Arabinrin Betty Anyanwu-Akeredolu’s busy mind again thought out the idea of making use of the important oloris (wives of the kings) in the different communities in the state to generate a data of the number of birth in the state, and ensuring that these births are recorded by the National Population Commission. With the data generation, the government will of course be equipped with enough information to plan effectively for the health and education of the children. Their mothers are registered in the government hospitals, with the Oloris acting as a link between the government and the pregnant mothers. Mortality rate is also reduced in pregnant women, as more of them have better access to medical care. With the introduction of the olori connection, birth registration in Ondo State has moved from an abysmal 45 per cent low to a 78 per cent and 43 per cent to 76 per cent in Ifedore and Idanre local government areas of the state, which served as the pilot local government areas where it was tested in the first year.

Now, the scheme has moved to the other local government areas of the state.

Worldwide, the growth in rate of maternal mortality rate in Africa has always been a source of grave concern. For Arabinrin Betty Akeredolu, this is yet another programme for pregnant mothers. “Solayo” means safe delivery, and to ensure this, all pregnant mothers are provided with kits to ensure they have everything that will be required of them at the delivery point in the different hospitals. With ABIYAMO, the newly introduced insurance scheme for pregnant women in Ondo State and SOLAYO kits already given, easy and safe delivery is assured in Ondo State.

This is a Foundation for wives of Ondo State officials and female government appointees. This initiative of Her Excellency is aimed at having an umbrella body for activities that concern women in the Sunshine State. The foundation is a departure from the norm of women meeting to sing, eat and go home. In the case of FOWOSO, women are taught to have a mindset of standing up for themselves, given the boldness to stand shoulder to shoulder alongside their husbands in terms of building a strong and economically stable family. In FOWOSO, women are taught the bravery to speak out when necessary, and above all, given several skills to ensure financial stability.

The women in the 18 local government areas of Ondo State  are taught skills of particular interest to them, and are given the start up kits of their tools of trade. So far, over 2000 women have had life-changing testimonies under the foundation because of the life-enhancing skills given to them. The family base is also better cemented, as finances now come in, not just from the men.

Therefore, the recognition of Arabinrin Betty by Tribune Newspapers has shown that the media house does truly recognise that she is doing a lot by way of life-changing welfare packages. The recognition which would have had the nod of the Sage, Chief Obafemi Awolowo, had he been here with us.

And for the management of Tribune, the womenfolk and the good people of Ondo State, the award is a stimulant meant to encourage her to do more.

Tribune has shown that good governance is not a respecter of political party nor tainted by association, knows no coloration, isn’t gender-based, neither does it know ethnic bias.

Arabinrin Betty Anyanwu-Akeredolu is a woman in a different class, soft spoken, yet with a knack for saying it as it is. Her recognition by the Nigerian Tribune, alongside some notable male personalities, says a lot about doing what you love to do, how best you know to do it.

Arabinrin Betty Anyanwu-Akeredolu has been exhibiting her passion over the women and girl child and today, Tuesday, December 10, 2019, comes the reward for these good initiatives of hers.

I congratulate Arabinrin Betty Akeredolu on this honour well deserved. The award is a testimony to the trite statement that progressive governance has no ambiguous definition, wherever they exist or could be found, it is always recognised by the progressive lens of the people whose concern is the good of all.

Indeed, this is an award from the cradle of journalism.