Ajimobi: Why Makinde should move on 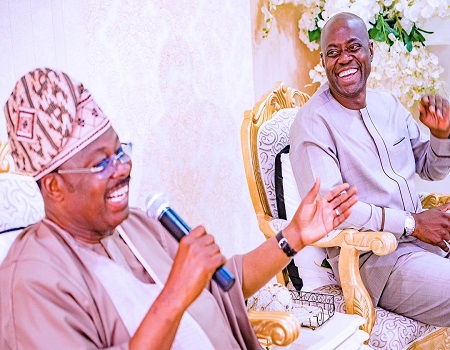 These are not the best of times for Oyo politics. And for Governor Seyi Makinde who has cut for himself, the image of a young, dynamic and focused politician, recent happenings could be quite disturbing. His emergence as governor of Oyo State in the 2019 election was spectacular in many ways.

Against the wish of the then out-going governor, Abiola Ajimobi who passed on recently and his political party, the All Progressives Congress (APC) to put a successor in place, Makinde won the governorship election in the state with the ticket of the Peoples Democratic Party (PDP), which was until that time, an opposition party in the state.
It is also interesting to note that Makinde comes from the same Ibadan zone as Ajimobi. How the same Oyo electorate particularly those from Ibadan that elected Ajimobi later settled for a much younger Makinde also deserves attention. That defines them as an enlightened electorate that knows what they want at any given time.

But Ajimobi could not be stopped by the fact that Oyo State practically rejected his APC despite that it is the ruling party at the federal level. Even though he also contested for a senatorial seat and lost he didn’t give up. Ajimobi was still in the contest for the control of his party when his unfortunate demise occurred. While he was struggling to stay alive, his party on June 6, the National Working Committee of the party pronounced him the acting national chairman following the Appeal Court order affirming the suspension of the substantive national chairman, Adams Oshiomhole.

That is simply indicative of the fact that he still had a strong political influence, home support and formidable structure. To a large extent, Ajimobi performed creditably as governor. No doubt, there were some sour points just like in every other administration.

In the midst of what seems to be a gathering storm, a great challenge lies ahead for Governor Makinde. And that is the 2023 elections. He will need to retain his seat as Ajimobi did in 2015 when he won reelection, and also to deliver the state to his party. This is achievable if he can remain focused and deliver good governance to the people. Therefore, sustaining a conflict with the Ajimobi family can only yield a negative result for him. What will work for him is an amicable political solution to a problem, which some political jobbers are waiting to feast on.

The incident at the eighth-day Fidau prayer for the late Ajimobi last Sunday, where the deputy governor of the state, Rauf Olaniyan was prevented from entering the venue was a reinforcement of the unnecessary bickering between the Makinde administration and the family of the late Ajimobi. It was the same deputy governor that had an exchange of words with Florence, the late Ajimobi’s wife when he led other top politicians to the home of the Ajimobis to condole with the bereaved family.

Although the spokesman of the late politician later issued a statement denying any premeditated plan to stop the deputy governor and the rest of the state government delegation from entering the venue, a counter statement from the government’s side indicated otherwise. Pointedly, the wife of the late Ajimobi and the family’s praise singers should be told that this unnecessary show should not be taken too far before it becomes a show of shame. The late Ajimobi does not deserve that. Moreover, he was widely acclaimed to be a man of peace.

Even if there was a conflict between the two parties prior to the death of the former governor, the family of the late politician should see reasons to sheath their sword. This family needs to be told that the incident of last Sunday shouldn’t have happened. And that is to say the least, a disservice to the late Ajimobi. Rather than continue on the warpath, the Ajimobi family should find a way to support and work with the Makinde administration. That is how they can give peace to both the living and the dead.

On his part, Makinde should shun petty politics over his predecessor. The unfortunate demise of the former governor has put the incumbent in a position to galvanize all the political blocks and groups in Oyo politics and seek their support to move the state forward. He needs to build on the legacies of Ajimobi rather than engage in a needless war.
Ajimobi left enviable legacies in education, peace and security, social welfare of the people as well as infrastructure development among others. He wanted Makinde to succeed. He wished him well despite their political differences. That was evident in his body language, words and deeds while he was alive.

That Makinde himself commended Ajimobi for the blueprint he left for him (Makinde) is also worthy of commendation. It is a mark of good leadership quality on the part of the governor. In addition to sustaining the legacies of the late former governor, the least Makinde can offer him in death is peace.

Given the complex nature of Oyo politics, Makinde needs to get more pragmatic. If he plays his politics well, he may discover that the political structure Ajimobi left behind could be inherited for the benefit of the state.

This is the time for Ibadan political elites and elders to rise up and provide Makinde with the much-needed support and words of wisdom. Their intervention should take precedence over that which may be offered by stakeholders with pecuniary interests. It is also a time for the Ibadan zone that produced both Ajimobi and Makinde to reason together bearing in mind that the other two zones in the state are patiently waiting for a power shift. Makinde should, therefore, shun distractions such as that generated by the death of Ajimobi and face the future.

Who is afraid of Prof Yemi Osinbajo?