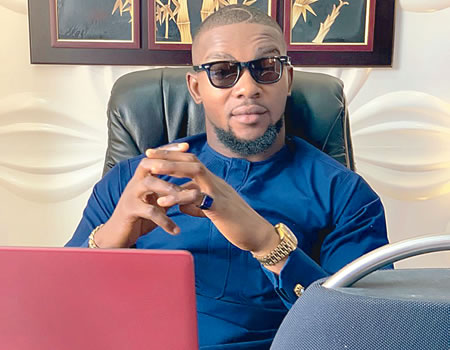 For the crème de la crème of the society, whether they are entertainers, entrepreneurs or executives, Donye Ayodele Samson, has got them as his clientele as he continues to thrive and redefine the face of luxury with forward thinking and innovative solutions despite the prevailing pandemic onslaught.

At a time when many of his peers were looking to take on internships in the face of fierce competition for white collar jobs post-university education, the popular jewellery dealer took an unpopular business path despite the daunting challenges.

Many entrepreneurs consider the jewellery business as one for the strong of heart and deep in pocket but despite a humble background and nothing but a drive to succeed and make marks, the Lead City graduate has managed to get it right where others wouldn’t venture.

With patrons in the country and beyond and a social media following running into thousands in just five years of taking the first business step, the – boss spoke with R on the earlier challenges and his ambitions to extend his market base to major cities in Nigeria and highly placed countries in the world.

Like many big ventures, starting out was always challenging and the young man was no different. However, sources close to the mogul disclosed that the passion and ambition to oversee a multinational venture did keep him going during tough times.

His early days were tough as potential customers found it hard to trust him with huge amount of money especially in conditions where they had to pay ahead of their goods. With time, however, the track record improved and customer base expanded to include foreigners and abroad-based Nigerians.

More so, the advent of the social media has also helped sellers in this age to transact with anybody anywhere in the world and jewellery seller are no different as digital revolution continues to disrupt the old way of doing business.

But for the economically biting COVID-19 outbreak, the mass communication graduate was already seeing himself extending the physical base of his growing luxurious empire to other countries and revealed that plans were already set with execution the only thing left as many rivals in the same market as him acknowledge that the pace of his growth has been impressive.

On the future of the industry especially with the recent global economic recess, the popular dealer expressed optimism ahead of full resumption of economic activities because his business caters for musicians, actors, career people, entrepreneur, fashionistas and people from all walks of life, hence, things could only get better.

Coalition advocates for more funding against malnutrition in Gombe