Abdulrazaq in battle against Saraki, PDP 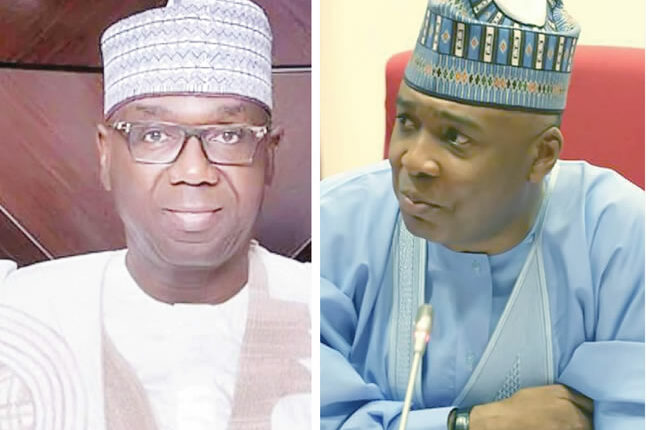 The North-Central State of Kwara is one of the states in the country where both the presidential and governorship elections promise to be very tough and interesting.

Chieftains of both the People›s Democratic Party (PDP) and the ruling party are smarting for a showdown in the state.

Leading the war for the PDP is a two-term governor of the State, former Chairman of the Nigeria Governors Forum and immediate past Senate President, Senator Bukola Saraki.

Saraki is the head of a political dynasty which was dethroned by the incumbent APC governor, Abdulrahman Abdulrazaq.

The grip of the Sarakis on the state dated to the era of former Senate Leader, the late Dr Olusola Saraki. For over two decades, any politician seeking elective office sought the endorsement of the late Saraki, the man with the sobriquet, Oloye, who decided who got what, when and how. The structure inherited by his son, Bukola, however, suffered a serious setback in 2019, as candidates on the platform of the PDP from governorship, state and National Assembly seats lost their tickets, having been drowned by the Otoge (we have had enough) chorus of the APC chieftains in the state.

Governor Abdulrazaq had combined forces with certain chieftains of his party to outsmart and displace the Saraki dynasty in what has been described as a major political tsunami. Individuals who joined forces with the Kwara State governor included incumbent Minister of Information, Lai Mohammed; serving Minister of state for Mines and Steel Development and daughter of the late Saraki, Senator Gbemisola Saraki and Professor Oba Abdulrasheed, who had since dumped the ruling party for the New Nigerian People›s Party (NNPP) where he had emerged as its governorship candidate. One of the governor›s confidants, Senator Yahaya Oloriegbe, representing Kwara Central in a major upset also lost return ticket to the National Assembly.

Ahead of the next general election, the pervasive feeling in Kwara is that the APC is divided against itself, no thanks to the internal dissension, occasioned by the battle for the control of its structures between Governor Abdulrazaq, the leader of the party and aggrieved members led by Information Minister, Lai Mohammed.

Governor Abdulrazaq eventually stamped his authority, when his allies took over the leadership at ward, local government and state chapter executives with one of his loyalists, Prince Sunday Fagbemi, taking charge as chairman.

Speaking recently at a public function in the state, the estranged minister of Information told journalists that his structures were still intact, and pleaded with them to wait for the outcome of 2023 general election.

«I am glad you noticed that I have here today the same people I have been working with within the last 20 years politically in Kwara. Though they tried to pluck me away from them, we interact regularly and we have almost become a family.

“My political structure cannot be torpedoed because of disagreement. “That is the essence of political structure: when you are strong enough to weather the storm that will necessarily come up, especially when it is time to vie for political offices.»

Former Minister of Youth and Sports and senatorial candidate of the PDP for Kwara Central, Honourable Bolaji Abdullahi, in a recent interview, made reference to the crisis rocking the Kwara APC chapter as he boasted that the main opposition party was set to regain lost grounds in the state.

«Are they still together? Professor Oba Abdulrasheed has left. He is the governorship candidate of the NNPP. «Almost everybody that was part of it has left the party for Governor Abdulrazaq.

«The point I am making is that we benefited more from our failure in 2019 than the APC benefited from their victory and we have to look at it in that context. Number two, the Kwara people chased away the PDP people in 2019 because they felt they were no longer doing enough in the interest of the people, and then they brought in the APC. But today, the people are looking back and asking themselves, ‘what have we got from the APC?’

Supporters of the Kwara Governor continue to insist that he is being demonised and has lost favour with some of the party chieftains because of failure to dispense party patronage– what is now termed «stomach infrastructures,» in Nigeria›s political lexicon. The governors allies and foot soldiers are in a hurry to mention his provision of social amenities, upgrade of public health institutions and the creation of the Kwara State Social Investment Programme to uplift the living standards of the majority of the citizens rather than the privileged few.

The emergence of former aspirant for the APC national chairman, Saliu Mustapha, as the senatorial candidate for Kwara Central would go a long way to mitigate the anger of the social gatekeepers and power brokers against Governor Abdulrazaq.Mustapha, who is also the Turaki of Ilorin, enjoys overwhelming support of the people through his commitment to developmental issues in the state and unsparing generosity.

According to a party source, the influence of Saliu Mustapha will come handy for the embattled Kwara State governor. He said:» Although only political parties and their logos will be on the ballot on election day, the victory of a party usually rests on the shoulders of personalities whose influence counts at the polls.

«These influential personalities could either come across as the candidates, godfathers, elder statesmen or party chieftains. « The source recalled that Mustapha defeated a serving Senator, Yahaya Oloriegbe, last June to clinch the APC ticket for Kwara Central. Because of his posture to matters concerning the Emirate and closeness to the Emir of Ilorin, Dr Ibrahim Sulu Gambari, Mustapha is believed to be backed by the traditional institution.»

Some analysts are of the opinion that the open support for the Kwara governor and the presidential candidate of the party, Senator Bola Tinubu could count against Mustapha›s aspiration for the Senate.

A chieftain of the APC, Aliyu Hassan, noted that being in the vanguard of fresh mandate for the Kwara governor and promoting Tinubu›s ticket «could open the Turaki of Ilorin to incendiary attacks, blackmail and propaganda for coming all out for the party.

«The opponent of Governor Abdulrahman Abdulrazaq would attack Saliu. In fact, the opponents of Bola Tinubu would as well because they feel he is one individual strengthening the party in Kwara ahead of the very significant 2023 election.»

He added; «If you check well, the candidates for other positions in the state may face no hurdle. Look at it from Kwara North to South. This is why it is easy to see that the attacks against Saliu go beyond his aspiration to represent the good people of Kwara Central in the Senate. It is most definitely because of his being the poster boy for his party in Kwara.»

Also commenting, the spokesperson of a group, the Kwara APC Frontiers (KAF), Comrade Mashood Alaiya, stated that the party was united ahead of the 2023 polls and is committed to deliver every part of the state. Ignore the insinuations from the opposition. The two frontline candidates of our party are working well together. They are not bothered about who is doing too much or less because they both believe in collective efforts,» he stated.

Is APGA in the 2023 presidential race?

The takeoff by Adeleke

2023: Court turns down request to compel INEC to strike out Tinubu’s name