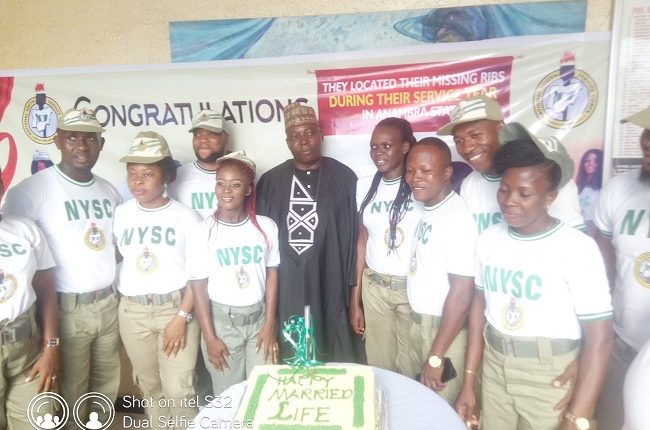 All of them have tied the knot to the joy of the NYSC family and many.

In his brief remark, shortly after a wine toast, the state coordinator, Mr Kehinde Aremu, while commending the state Governor, Willie Obiano, for creating a conducive environment for the huge success of the event and his commitment towards the welfare of Corps members in the state, urged parents to always pray for such privileged for their children at any given time.

He said the scheme has not had such laudable event since its creation in Nigeria.

“I prayed for you all to have a joyful and loving married,” he added.

On her part, the Assistant Director, NYSC South East Area office, Mrs Ify Nwafor, said many people embark on NYSC for different reasons and one of it includes the chance to meet the love of their lives.

The married Corp members, Mrs Okearu Chinyeremaka, Mrs Bernard Faith Amarachi, Mr Oluchukwu Davis and Ohale Nkemakolam on their separate modes, explain that they met each other at different locations which include; morning prayers at the orientation camp, Onitsha park among others, where they got attracted to each other before starting their relationship.

The party also said that immediately the Caretaker/Extraordinary Convention Planning Committee was put in place after the NWC’s dissolution, the crises that had characterised its affairs were laid to rest…NYSC programme NYSC programme

His son, Aminu Shehu Idris, confirmed in an interview with the Tribune Online that his late father who was appointed on 15th February, 1975 and spent 45 years in the throne died on Sunday after a protracted illness…NYSC programme NYSC programme

A Kano based industrialist, Chief Kalu Ogbonnaya, has advised the Federal Government to take necessary steps to stimulate the nation’s economy to prevent a recession post COVID-19…NYSC programme  NYSC programme