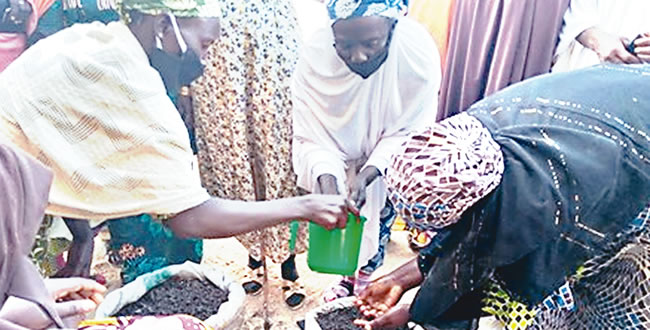 It has been revealed that at least 47 per cent of Nigerian farmers have no access to post-harvest storage facilities, this according to a renowned research and strategic communications consulting firm, SBM Intel.

According to AgroNigeria, SBM Intel made the revelation in a research documentation titled: “Nigerians just want to eat”: Analysis of Farmers and Food Transporters challenges likely to impede National Food Security”.

According to SBM Intel, this inadequacy could lead to post-harvest losses for the farmers, who they also noted, may not be able to arrest the situation by acquiring their storage facilities.

The report reads: “In our survey, almost half (47%) of the farmers interviewed had no access to any kind of storage facilities.

“The lack of storage facilities contributes to post-harvest losses which could get as high as 60% for tubers, fruits and vegetables.”

Nairametrics reports that SBM also revealed the situation had forced a lot of farmers to sell their produce to others with warehouses.

Soaring food prices, among other factors, had led to a projection of acute food crisis, from various key players.

To this end, the report suggested more proactive short and long-term measures to prevent such occurrences.

According to the report, border opening and adoption of Climate-Smart agriculture could help prevent food shortages across the country.

“In the immediate, the government must fully reopen land borders and end the ban on using forex to import staple crops.

“After placing maize on the list of items no longer eligible for foreign exchange only on 14 July 2020, the President announced the release of 30,000 tons of maize from emergency reserves on 2 September, and also approved four firms for the importation of 200,000 tons of maize.

“This could replicate itself for items like rice and cassava in the coming months, items which millions of Nigerians depend on for sustenance.

“For the longer term, wider adoption of irrigation, facilitating the provision of early maturing and drought-resistant crop varieties and a switch to climate-smart agriculture is the best way to guard against crop failure and poor yields,” the report read in part.

Education as enabler of development