3 die for alleged rejection by doctors at ATBUTH

• As CMD sets up investigative committee 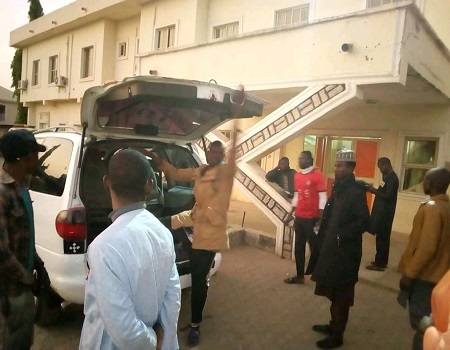 Following series of alleged negligence by doctors on duty at the trauma centre of Abubakar Tafawa Balewa University Teaching Hospital (ATBU), Bauchi which has led to the death of not less than three patients who were rejected, management of the Hospital has set up an investigative committee to look into the allegation.

Chief Medical Director (CMD) of the Hospital, Dr Alkali Mohammed while speaking with our Correspondent on phone confirmed that he received a report that a patient brought to the Center was rejected by the Doctor on duty leading to his death saying that he has immediately constituted a committee to investigate the allegation assuring that anyone found culpable will be dealt with in accordance with the code of conduct of the medical profession.

Though Alkali Mohammed agreed that the Center is no longer big enough to contain the flow of patients on a daily basis, disclosed that efforts are on to have another centre that will complement the present one advising however that other hospitals in the state should expand their trauma and emergency centres in order to complement that of ATBUTH.

ALSO READ: Over 30,000 PDP members defect to APC in Zamfara

Alkali Mohammed reiterated that “you will recall that I have given a standing directives that on condition must a patient turned back medical personnel in the hospital without offering at least first aid in order to save the life of the victim, get him or her stabilized before sending to another facility, ours is to save life”.

Some victims of the incidents of rejection had alleged that when they took their patients to the trauma centre of ATBUTH, they were rejected on the excuse that there was no space a development that led to their death.

Mr Amos Sunday of Rafin Zurfi explained that on Monday, he took his brother, late Sunday Olaniran to the centre when he had cardiac arrest but was rejected for lack of space saying that, “on our way to Ni’ima Specialist Hospital, he died as he was confirmed ‘brought in dead’ (BID).

Another person who spoke to Journalists pleading anonymity because he is a civil servant narrated that, a car knocked down a boy at Buzaye village and was brought to the trauma centre but was not attended to until the innocent boy died while on the bed.

He explained that when they got to the trauma centre, the Doctor on duty told them to go to another facility due to lack of bed space adding that, “because of the critical condition of the boy, we looked around, got a bed, laid him but the Doctor yelled at us that he will not attend to the boy because we crossed our boundaries by insisting”.

The visibly angered middle-aged man added that “the most annoying thing was that, for more than 30 minutes we begged this Doctor to save the life of the boy but instead, he blocked his ears with earpiece of his phone, neglected us until the boy died, what a callous and criminal attitude by a person trained to save lives”

Gombe to track incomes and expenditure of 2020 budget