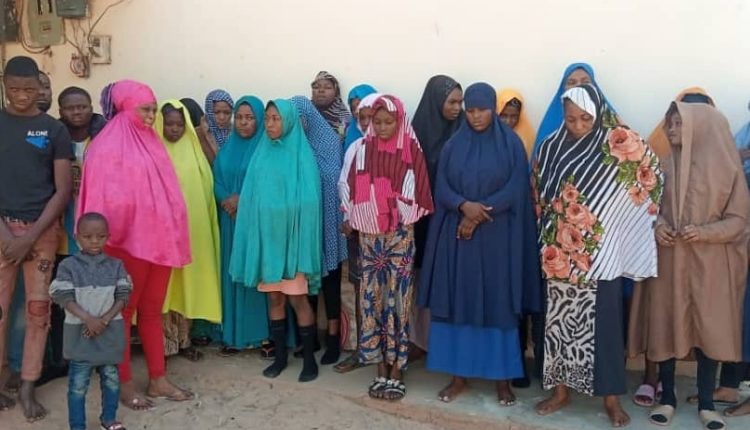 Twenty-seven victims of human trafficking from various parts of South-West who were being trafficked to Libya, Algeria and Turkey have been intercepted and rescued by policemen at a village in Katsina State at the border point with Niger Republic.

The rescued victims, comprising 21 ladies, four men and two children from various parts of the South-West states and one from Delta State, were intercepted at Unguwar Jummai in Mai’addua Local Government Area of the state, a border town with Niger Republic, while about to cross the border, according to the state police command.

According to the Katsina State Police Command through its Public Relations Officer (PRO), Isah Gambo, following a tip-off, policemen went to the village and saw the victims and the traffickers.

It was however gathered that the traffickers, on sighting the policemen at the village, fled in different directions, leaving behind the victims who were later taken by the policemen to the state police command.

According to the statement by the police on Thursday: “On 11/12/2020 at about 11.00 p.m., the command succeeded in rescuing twenty seven persons, comprising twenty one females, four male and two children.

“They were all victims of human trafficking on transit from the southern part of Nigeria to Libya, Algeria and Turkey. Victims were intercepted at Unguwar Jummai, Mai’addua Local Government Area of Katsina State, a border town with Niger Republic.

If hundreds of students could be abducted in Buhari’s home state, no place is safe again, says Benue gov

COVID-19: Niger govt orders all civil servants to stay at home from Monday till further notice