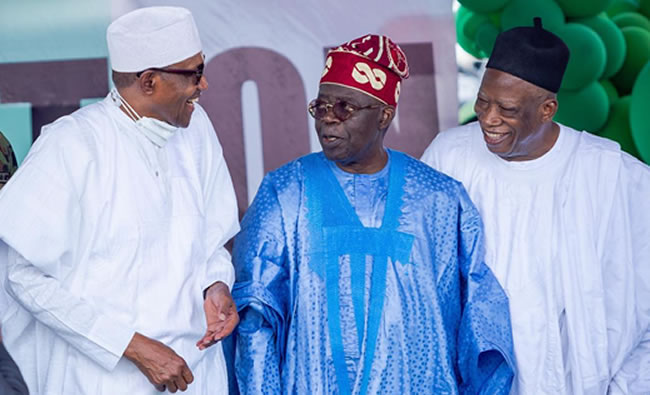 STAKEHOLDERS from the North-East zone of the All Progressives Congress (APC) are set for a showdown with their counterparts from the North-West over the slot for the running mate of the party’s presidential candidate for 2023 election.

The APC National Working Committee (NWC) has since sent the name of Kabiru Masari as running mate to the presidential candidate, Senator Bola Tinubu, amidst speculation that the party would soon substitute him before the deadline stipulated by the provisions of the Electoral Act.

Tinubu, at a function last week, had said he was still consulting over his running mate. Masari is incidentally from Katsina, in the North-West as the incumbent president, Muhammadu Buhari.

The zone, last week, said that it would seek audience with Senator Tinubu and present its demand for the running mate slot.

But at the weekend in Abuja, APC stakeholders from North-East, at the end of a meeting, said for fairness, equity and justice, the slot of running mate for Tinubu should be conceded to it.

Addressing newsmen after the meeting, national coordinator of North-East APC Stakeholders’ Coalition, Alhaji Abba Aji Suleiman, described the stance of NorthWest to produce the running mate to Tinubu as “not only misplaced, but a gross display of insensitivity to the relevance of other regions in the scheme of things in the party.”

The North-East stakeholders argued that, “the NorthWest had been within the corridor of power in the last seven years of the President Muhammadu Buhari administration, and for such demand to be made indeed speak volume of gross insensitivity.

“It is the considered view of stakeholders in the NorthEast that it would only be  fair and just if the running mate slot goes to the NorthCentral, given the numerous contributions of the region to the growth and development of the party.

“The stakeholders must come to terms with the fact that the North-Central region hasn’t had a shot at the highest level of governance since the return of democracy in 1999. This time has presented that unique opportunity that must be utilised in the party’s best interest.

“The North-West APC Stakeholders must also realise that the overarching objective of the party is to secure a landslide victory at the polls and if that is indeed the case, would it make any sense if a region that has been represented adequately in the last 10 years also demand the vice-presidential slot?

“The stakeholders of the APC in the North-East wish to use this medium to call on the leadership of our great party to ensure justice and fairness by providing that the vice presidential slot be given to the North-Central.”

He expressed concern that “despite the array of credible candidates in the region, with excellent profiles and broad appeal across the country, the North-Central zone has been denied relevance.”

At a separate briefing, Director-General of the Voice of Nigeria (VON), Osita Okechukwu, said both the Labour Party (LP) and the New Nigeria Peoples Party (NNPP) constitute no threat to the ruling party in the forthcoming general election.

The APC chieftain expressed confidence that the ruling party would win convincingly in the NNPP Rabiu Kwankwaso’s zone of NorthWest and also defeat the LP candidate, Peter Obi, in the South-East.

Atiku decries worsening case of insecurity in the North-East