NotTooYoungToRun: Would youths ever be ready for leadership positions? 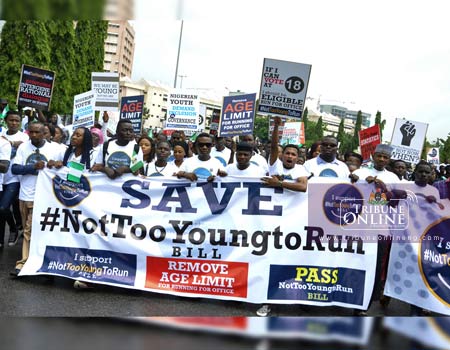 OBVIOUSLY, not everyone that goes to social media to discuss politics really knows and understands the game of politics.

Some post on their timelines for it not to be empty, while many others post to know how relevant their posts are, through the number of likes and comments they gather. There are some that even post because their friends are doing the same ― for social media recognition.

As it’s now the habit of Nigerians to lament on social media, some go as far as copying from the walls of other intellectuals or points they heard from various arguments and interactions.

I am happy with the latest development by some progressive youths who are ready to revolutionise the government from its menopause state and save it from our Methuselah-like leaders.

But my fear and points are these: How prepared are the youths for this? How are they planning to achieve this? Are other youths from other tribes or regions in the country ready to embrace this? Does it seem like the educated youths are alone in this? Given the historical information of clamouring, tested with positions and opportune attainments, how far can this go if eventually success is attained?

Nigeria politics operation is no rocket science. Your emergence in most political parties depends on your financial buoyancy and sometimes your personality.

In our dear nation, no matter how good your manifestos are and how beautiful your visions for the electorates are, if you don’t contest from a solid political party, you can’t get to the position to showcase your good deeds and intention.

Same rules apply to the primary elections, the delegates prefer to vote for the highest bidder as the flagbearer of the party, rather than someone who has good intention and not financially buoyant.

My concern now is: how many youths have the millions to spend on elections or will flagging a new political party for the youths be the better option there?

Though we have the Youth Democratic Party (YDP) already, I think we need to strategise very well in this aspect and plan how to tackle this.

To achieve this, I think youths need lots of education. Although some are a university, polytechnic, and college of education graduates but relevant education in the art of politics has to be circulated to avoid ending up as political illiterates.

It’s surprising that some of these revolution crusaders have started chanting the names and throwing support for old leaders as the better solution to all the mess we are going through presently in the nation.

This got me wondering if there’s no other credible candidate out there who is not from the two political parties that have been ruling for some years now that these youths can support.

We are ourselves problem ― rotating the same set of political masquerades out of lack of knowledge.

Southwest youths are the major agitators clamouring for a revolutionised government as seen. Youths from the south-south and southeast part of the country are busy agitating for the freedom of Biafran Republic.

How possible is it that they are ready to be in support of this and leave behind the interest of the Biafrans?

Or the northerners who believe they are the real citizens of the country should be considered first in every activity taking place in the nation.

How possible is it that this battle will not be left for the literate youths alone?

Statistically, the present figure of the uneducated and school dropout youths in the country is higher than the educated ones.

I laugh and at the same time cry before getting angry at some set of willing wailers that come to lament on how bad the government is even when they have no clean records from the few posts they’ve attained as beginners.

‘Yeye’ comrades doing “oju aye“, some of them are even being used as weapons of destruction against their fellow youths.

People who can embezzle a huge amount from association dues, or try to break the school rules to contest for a Student Union Government (SUG) position and manipulate the election without having the required criteria knowing full well what the modalities are, or using their post as the quickest means to woo ladies.

Doing all sort of unlawful things like smoking marijuana, having unlicensed arms in their possessions and sending miscreants after anybody that opposes their ideologies.

Yet, these are the set of people that want to join this train of revolution. Hmm, I sigh deeply and shake my head for the aftermath of this movement if these types of people are fully involved.

The cub will surely look like the lion. Some of them have their role models among these leaders. Having established this fact, if success is achieved what then do we stand to face again? A continuation of what their role models left behind and take it to the next level or a correction of their role models did wrong?

We need not deceive ourselves, judging from how youths are so eager to become rich these days, the problem would begin when money starts getting involved.

If a great nation would be achievable, we have to come together with a reasonable way forward.

NotTooYoungToRun bill: The renewed hope and future of Nigerian youths