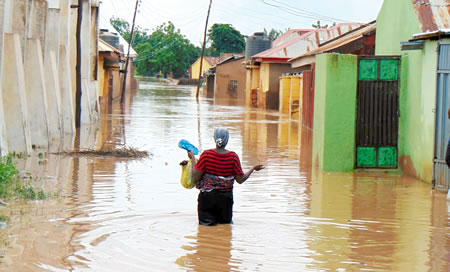 No fewer than about 10 persons have been killed by flood disaster at the weekend in Niger State.

The incident occurred in Suleja Local Government Area of the state on Saturday, following a heavy downpour.

Confirming the incident was the Director-General of the state Emergency Management Agency (NSEMA) Malam Ahmed Ibrahim Inga in a brief interview with our reporter by telephone on Saturday in Minna, the state capital.

He said, “The rain which began at about 4:00 am lasted till 8:00 am,” adding that six persons died at Unguwan Gwari, three others died in Madalla area of the local government while another one died at Polosa area.

He said bodies of the 10 victims have been recovered during a search operation conducted by staff of the agency (NSEMA) in conjunction with the support of some residents in the area.

In a related development, at least five persons have been killed in a boat mishap which occurred at Gurmana village in Shiroro Local Government Area of the state.

The DG, NSEMA, Malam Ahmed Inga who confirmed the incident to Nigerian Tribune on Saturday, however, did not give more details on the incident but said bodies of the victims were yet to be recovered as of the time of filing this report.

He also said the wooden canoe said to have been conveying the victims has still not been sighted.

Buhari Will Not Resign, Presidency Replies PDP
The Presidency has rejected the call by the Peoples Democratic Party (PDP) for President Muhammadu Buhari to resign due to the amount of corruption being uncovered in his administration… Read Full Story
Arotile’s Death: NAF Hands Over Suspects To Police
The Nigerian Air Force (NAF), on Friday, officially handed over to the Nigeria Police the three suspects, Mr Nehemiah Adejoh, Mr Igbekele Folorunsho and Mr Festus Gbayegun, involved in the incident that led to the death of late Flying Officer Tolulope Arotile… Read Full Story
COVID-19: Oyo Overtakes Lagos, Records 191 Daily New Cases
Oyo State has reported its highest one-day total of new COVID-19 cases since the start of the pandemic, with 191 new infections. The data released on Friday night by the Nigeria Centre for Disease Control (NCDC) revealed that the state also toppled Lagos State from the number one spot in daily new infections… Read Full Story