You did not address problem of the North, CNG tells Northern Governors 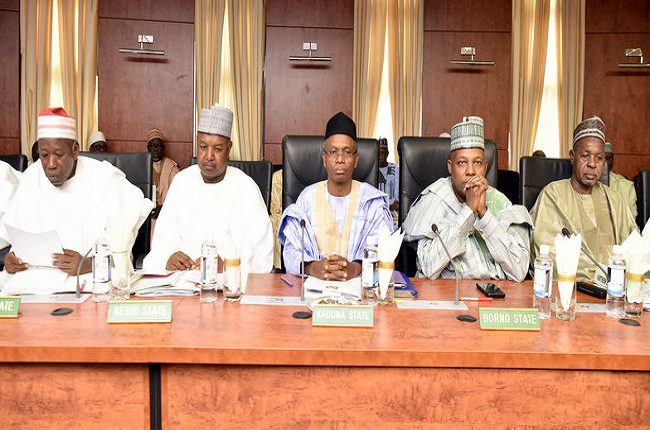 The Coalition of Northern Groups (CNG) has expressed dismay over the recent resolutions made by the Northern Governors Forum saying they did not address the multiple of problems facing the region.

This was even as they called on the governors and other leaders of the region to rethink the apparent weak position adopted at the meeting and redeem their failure to articulate a more favourable northern position.

Addressing a news conference in Kaduna on Wednesday, CNG spokesman, Abdul-Azeez Suleiman remarked that the meeting’s agenda was grossly misplaced.

While it said it has no quarrel with NGF’s observation on the need for roles for traditional rulers, it also agreed on the need for quick resolution of the overdrawn ASUU misunderstanding with the Federal Government.

‘We also agree with the NGF that to a large extent, social media platforms have been turned into avenues for dissemination of fake and dangerous information.

“We are disappointed that such a meeting should lack the courage to make clear pronouncements on the unprovoked attacks on northerners and their properties at a time when their southern counterparts are proposing claims of trillions of Naira in compensation for their people.

“We are disappointed that the meeting lacked the requisite statesmanship to define the northern position with regards to the falsified reports around the fictitious attacks on Lekki protesters that is causing the nation international worries.

“It is disappointing that the meeting felt to see as a priority the need to send a delegation to ascertain the extent of damage and to console the affected northerners in the southern states.

“We are disappointed that the meeting did not have the presence of mind to discuss the necessity of compensating the innocent northerners who were unnecessarily attacked, assaulted, killed, displaced and deprived.

The Inspector-General of Police (IGP), Mohammed Adamu, has convened a meeting with stakeholders and has agreed to meet all demands raised by the #EndSARS protesters, which include halting use of force against protesters and unconditional release of arrested citizens.CNG tells Northern Governors

Nigeria must restructure before next general election, SMBLF insists