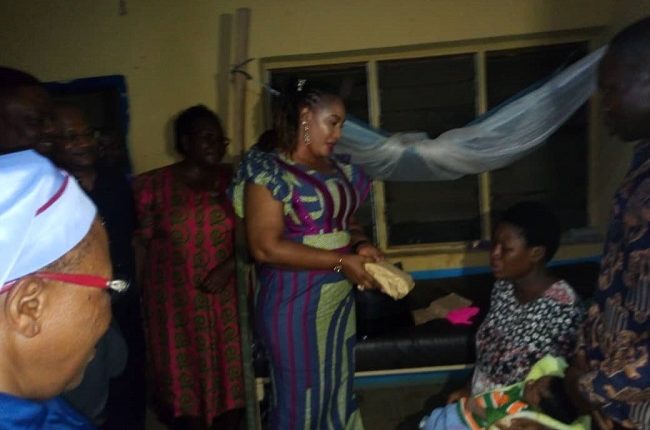 Ebonyi State Governor David Umahi has given the sum of N500,000 to settle the hospital bill of the mother of a  newborn baby who had been detained in a hospital in the state due to inability to pay the bill.

The baby was delivered through cesarean section at the Mother and Childcare Primary Health Centre, Abakaliki five weeks ago, with the sum of N130,000 charged by the hospital for the delivery of the baby out of which N80,000 was paid by the parents of the baby.

The parents of the baby, Mr and Mrs Sunday Igboke from Oriuzor in Ezza North Local Government Area of the state, lost hope of paying the remaining amount which forced the hospital not to allow the baby and the mother to go home until the bill was cleared.

But the couple’s joy knew no bounds when they received the sum of N500,000 from Governor David Umahi to settle the bills and take care of their newborn baby.

Luck smiled on Mrs Igboke when she was discovered by a team of some State Executive Council members on an inspection tour of public utilities and facilities around Abakaliki, the state capital.

The team led by the principal secretary to the governor, Chief Emmanuel Obasi, brought the woman’s plight to the attention of the governor who directed that the sum should be given to the family.

The governor further directed that Mrs Igboke be given automatic employment at her local government council headquarters to enable her to earn a regular salary for her family’s continued upkeep.

Delivering the cash to the beneficiaries on behalf of Umahi, the Principal Secretary to the Governor, Emmanuel Obasi admonished them to make good use of the money and the opportunity.

Obasi added: “You should know that our governor is a kind man. Incidentally, you are not the first or even the hundredth person he has shown this kind of love.

“The governor didn’t know you nor your husband. But because you are a citizen of Ebonyi State, he has extended this love to your family, and you only owe him your prayers, solidarity and support. He has directed us to come and deliver the message; we are only messengers”, he said.

Mr Igboke in an emotionally laden voice appreciated the governor for the gesture.

He narrated how he was nearly knocked down by a moving vehicle while thinking about how to secure the release of his wife and child from the hospital, adding that he had no assistance, apart from his aged mother.

He described the governor’s gesture as a miracle.

“I married my wife in the year 2015. Since then, those who are supposed to help us abandoned us.

“Her first issue was through caesarean section, and this time, the same problem has confronted us.

“I have been running around to secure money to no avail, and my aged mother gave me N1,000 to enable us to feed.

“God has used the Governor to answer our prayers, and I pray that God will grant him his heart desires,” he said.