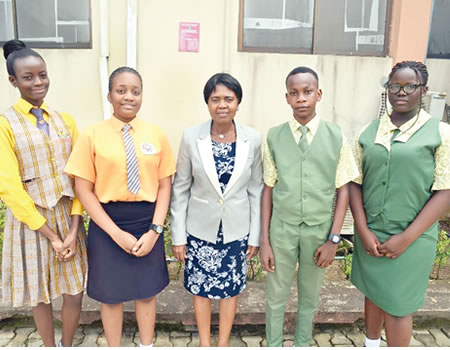 MISS Onitilo Deborah of the New Chrisfield College, Ikorodu, Lagos has been announced as the overall winner of the 2018 Mike Okonkwo National Essay Competition for secondary school students in Nigeria.

Master Esigbone Omagbemi Ferdinand of the Roshallom International Secondary School, Lagos came third, having scored 60 per cent in the first round and 47 per cent in the second round.

The chief examiner, Professor Akachi Ezeigbo, said, “After a painstaking scrutiny, we adjudged only four as suitable for invitation to the second stage of the competition, which is basically a confirmatory procedure to verify the integrity of the original submission.”

She noted, however, that the verve, creativity and imagination that characterized past performances had started to reduce, even though enthusiasm to take part continues to rise.

Professor Ezeigbo disclosed that incidences of plagiarism or direct lifting of materials from Internet, copying from textbooks and other printed sources, as well as proven cases of collaboration among candidates were noticeable in the entries for this year’s edition, as well as evidence that candidates might have received help from either their teachers or parents.

She said: “As the Internet and android phones have become basic infrastructures of knowledge production and transmission, our children must now be made to understand that there are regulations concerning the extent to which they can claim materials domiciled in those spaces of learning.”

She also counseled that rudimentary lessons on the rules of proper writing, how to acknowledge materials consulted and the consequences of plagiarism should form part of the curriculum of senior secondary school.

Miss Onitilo will get a gift of N100,000, personal laptop, trophy and plaque, while her school gets three sets of computer and printer.

The first runner-up, Miss Ashley Davidson, will go home with cash gift of N75, 000 and a plaque, while her school will get two sets of computer and printer.

Third place winner, Master Omagbemi Ferdinand, will go home with a cheque of N50,000, plaque and the school gets a computer set.

The lecture, to be delivered by Mr Femi Falana (SAN), will be chaired by Chief John Nnia Nwodo, president-general, Ohanaeze Ndi-Igbo worldwide.

Mike Okonkwo National Essay Competition was initiated in 2004 as part of activities to celebrate the birthday of the presiding bishop of The Redeemed Evangelical Ministry (TREM), Dr Mike Okonkwo (MFR), and more importantly to contribute to the development of the educational sector.

While the waiting game continues for former Nigeria Airways workers