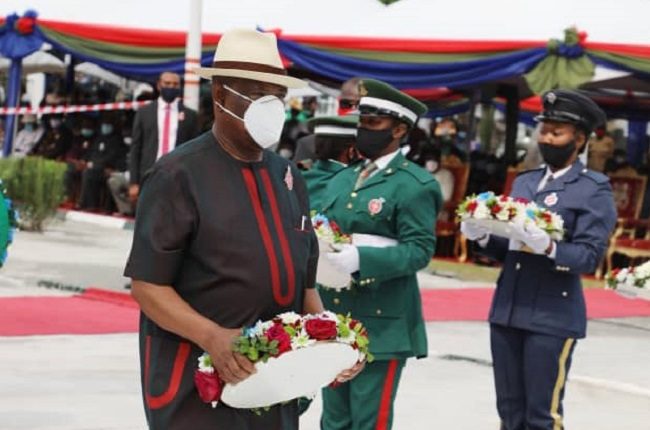 Nyesom Wike, Governor of Rivers State has joined calls from different quarters in the country for the sack of the heads of security agencies in the country by the President.

He explained that the Federal Government needed to change the Security Chiefs in order to allow for fresh ideas and strategy in tackling the threats to internal security in Nigeria.

The Governor made the call during the wreath-laying and parade ceremony organised to mark the 2021 Armed Forces Remembrance Day Celebration in Port Harcourt on Friday.

According to the governor, these insurgents have also destroyed private and public property with relative ease, and it is time for the Federal Government to take decisive action and end such menace.

Wike said; “A country is as strong as its Armed Forces. Her inability to defeat the Boko Haram insurgency despite years of full military engagement shows that all is not well with our approaches and commitments to the battle against the internal insecurity.

“Today, therefore, also raises the need for all of us to be worried by the deteriorating security situation across the country and restate the call on the Federal Government to do everything necessary to bring the security threat by Boko Haram and armed bandits to a decisive end in the shortest possible time.

“We thank the Service Chiefs for their efforts so far in the battle against the insurgents. But we also align with the concern of citizens that having seemingly reached their wit end, they should now give way for fresh hands and ideas to give the fight the impetus that it so strongly needs to ensure that Boko Haram and killer bandits are comprehensively defeated and smoked out of existence.

“The time has come for the Federal Government to stop the preteens, change strategy, seek help from our friends and confront the urgency of the internal insecurity situation in Nigeria with every weaponry at its disposal to stop the killing, free all hostages and improve the physical security of our country for all Nigerians,” he said.

The governor stated that all Nigerians are gracious beneficiaries of the various sacrifices made by the Armed Forces as they put their life in line to defend the country.

According to Governor Wike, the least duty every Nigerian owes the soldiers, veterans, and their families are to continue to remember, honour and celebrate them for their extraordinary courage in service and sacrifice to the country.

“On this solemn day and occasion, therefore, we join the rest of our country to honour and pay tribute to all our soldiers who died at the various battlefields in the service of our nation.

“We also salute and honour every serving members of Nigerian Armed Forces carrying on today in the noble tradition of those before them dutifully defending our nation’s territorial integrity.

“They are fighting to keep us safe and secure in the face of insurgencies from Boko Haram, bandits and other criminal elements threatening our peace and security across the country.

“Our beloved country is still together, existing and waxing stronger as one indivisible, free, and democratic country because of your commitment and sacrifice to its unity and progress.

“As Nigerians, our collective desire is to have a country where we can all live in unity, freedom and security. A country where our children and grandchildren can live in relative comfort and strive for a brighter future,” he stated.

The British Parliament at the Westminster Hall held a debate on ‘e-petition 554150, relating to Nigeria and the sanctions regime’ on Monday. The government of the United Kingdom has however responded…Wike joins call  Wike joins call

The surprise visit made on Friday night by the leaders of the ruling All Progressives Congress (APC) to former President Goodluck Jonathan at his residence in Abuja triggered a stir in the major political camps, resulting in at least four possible theories..Wike joins call  Wike joins call