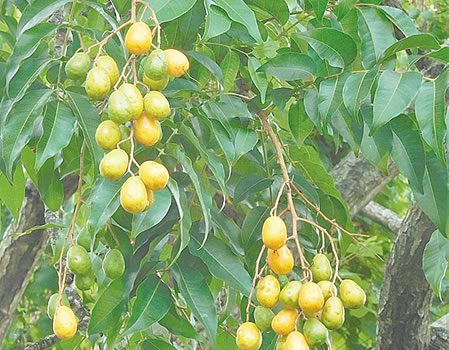 In a new study, researchers suggest that Spondias mombin contains potent angiotensin-converting enzyme (ACE) inhibitors that are capable of enhancing erection in addition to ensuring sexual fulfilment in men with erectile dysfunction. It impedes oxidative damage resulting in erectile dysfunction.

In the study, the researchers fed the Spondias mombin leave extract to adult male Wistar strain albino rats and at the expiration of the study, the penile and brain tissues were removed and tested.

Synthetic drugs have been technologically advanced to fight erectile dysfunction as well as neurodegenerative disorders. Moreover, these orthodox medications are inhibitors of many enzymes, including ACE, documented to exhibit numerous side effects.

Spondias mombin is called “Hog plum,” “Iyeye,” and “Olosan” (Yoruba) as well as ‘Ijikara’ by the Igbo. The young leaves which taste slightly bitter are cooked as green vegetable.

In traditional medicine, Spondias mombin has had a variety of uses. The leaves are conventionally used in the management of cognitive impairments in the Western part of the world.

Anti-fertility and antidiabetic activity of the leaf extract of S. mombin was also reported. It was also suggested as beneficial in the management of Alzheimer’s disease.

The flowers and leaves are used to make tea for stomach ache, biliousness, urethritis, cystitis, and inflammation. Its leaf-decoction is taken in Edo for dysentery and other intestinal disorders as well as for sore throat, and tooth decay.

In the traditional medical practice of southern Nigeria, the freshly boiled aqueous leaf extract of SM is used to treat dizziness, especially after childbirth, while the bark is used to treat mothers after delivery.S

The decoction of the leaves is commonly used to treat laryngitis, sore throat, and tooth decay. This product has also been very popular in traditional birth practices for its peri- and postpartum obstetric uses.

Its leaf extracts have been reported to have an antibacterial effect comparable to those of ampicillin and gentamycin. It has antiviral activity against coxsackie and herpes simplex viruses.

Moreso, the aqueous leaf extract of the plant has a dose-dependent anti-fertility action, but with full recovery achieved within four weeks after cessation of treatment with the extract.

The 2019 study in the Journal of Food Biochemistry was to ascertain the probable mechanisms of actions behind its use as reported in folkloric medicine in the management of diseases such as erectile dysfunction and central nervous system disorders.

The researchers suggested that the leaf extract inhibits Angiotensin II production that has been associated with hypertension. Hypertension is a key causative agent for erectile dysfunction. This makes a possible remedial point in managing hypertensive-induced weak erection in male.

Erectile dysfunction is defined as persistent difficulty achieving and maintaining an erection sufficient to have sex. Causes are usually medical but can also be psychological.

Many people suffering from erectile dysfunction continue to explore aphrodisiac plants as an alternative therapy because of their efficacy, accessibility, affordability, and minimal side effects. However, the extent to which these plants are used across the sub-Saharan region is not known.

Meanwhile, a systematic review of medicinal plants listed 209 plant species that are used as aphrodisiacs and or to treat sexual dysfunction in sub-Saharan Africa.

South Africa, Uganda and Nigeria are the countries with the highest recorded number of plant species, with the roots being the most used plant parts, and decoctions the most preferred method of preparation.

Others are Nasturtium officinale, Aframomum citratum (alligator pepper) Massularia acuminate (pako ijebu), and Musa paradisiaca (plantain). The root and stem as juice or juice from the fruit or decoction of the unripe Musa paradisiaca are taken orally.

When false publications may amount to criminal libel