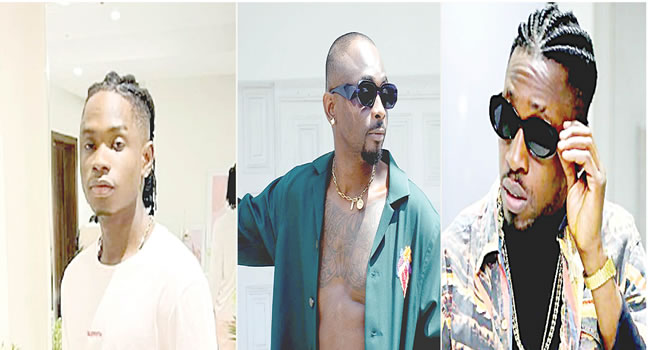 Many fans of Afro beat music stars, Morihanfen Oluwaseun Oluwabamidele, popularly known as Sean Tizzle and his counterparts, Esegine Allen, otherwise known as Orezi and Keshinro Ololade, also known as Lil Kesh have been asking questions about their whereabouts and if indeed they had turned their back against music as being speculated.

They rocked the music scene some years back but have suddenly disappeared from the entertainment industry and their fans have been worried about the downturn that greeted their music career.

Sean Tizzle rocked the music scene with popular hot songs, including Shole and Loke Loke while Lil Kesh, once under Olamide’s YBNL records, was one of the artistes that redefined the new generation of Afro-pop in the industry but not much has been heard about him since he walked away from YBNL.

R gathered that Orezi on his part was fans’ delight for some years and rocked many shows with his Ghen Ghen music style. He rose to prominence with his hit track, Rihanna in 2013 and stayed relevant a few years after but he seems to have fizzled out in the last four years.

Like Sean Tizzle, Orezi attempted to make a comeback this year with Kiss Me track, but he has since realised that he doesn’t have the same influence he had some years back.

Tizzle has not dropped any new song in three years and has remained quiet on his Instagram and Twitter where artistes usually update their fans about their activities, including new songs and tours.

Information pieced together by R suggested that Tizzle is currently in the US and may be planning a big come back next year.

Same could not be said of Orezi as his team believes that he has never left the music scene but has only assumed a position where he doesn’t have to drop songs constantly to show he remains relevant.

A stakeholder in the music industry told R that Lil Kesh has what it takes to stay on top of his game but he seems to have relaxed because of the fame and money he made from his shows and concerts over the years.

Lil Kesh however said he has been trying to rediscover and recreate his craft and would be coming out in a big way next year.