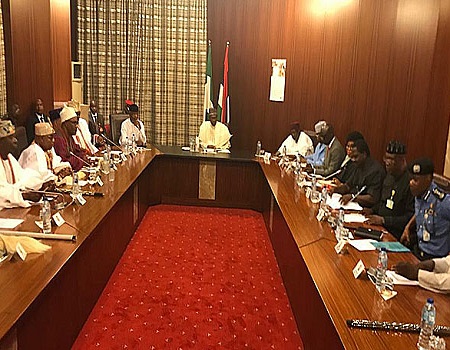 Share
President Muhammadu Buhari has assured Obas from the South West that his administration was doing everything possible to tackle security challenges in the country, including the deployment of technology to tackle the menace in the region.
Responding to an address by the traditional rulers led by the Ooni of Ife, Oba Adeyeye Ogunwusi during a courtesy visit to the State House, Abuja on Wednesday, the President said: “Working with the state governments we intend to beef up the equipping of the Police force with advanced technology and equipment that can facilitate the work of the security agencies.”
According to a statement issued by Femi Adesina, Special Adviser to the President (Media & Publicity) after the closed-door meeting, the President disclosed that he would be issuing directives to the appropriate federal authorities to speedily approve licensing for states requesting the use of drones to monitor forests and other criminal hideouts.
It quoted the President as saying further:  “We also intend to install CCTVs on highways and other strategic locations so that activities in some of those hidden places can be exposed, more effectively monitored and open to actionable review.
“This administration will continue to do everything necessary to protect the lives of all Nigerians and ensure that every Nigerian in every state is safe and that our people can live in peace and harmony, regardless of ethnicity, religion or region. As a government, we remain committed to the ideals of our democracy, particularly entrenching the rule of law and the sanctity of life.”
Buhari also assured the royal fathers “and the entire nation that we will enforce the law, prosecute lawbreakers and secure an atmosphere of tranquillity for all Nigerians wherever they choose to live and also protect our communities from all forms of crimes. This is both in our interests as an administration and the interests of the people who voted us into office.
“We need security to deliver on our many programmes to the people. There can be no prosperity if there is no security. This is not only a message of hope but a call to action to all of us as we seek ways to secure our country.
“On our part, as the Federal Government, we are ready to deal decisively with anyone that is fomenting this spate of criminal activities by every means necessary. We intend to deal severely with those evil Nigerians inciting violence for political ends.”
The statement added that while acknowledging the presence of significant security challenges in the South West and other parts of the country, President Buhari said  such  understanding informed the ongoing consultations embarked by Vice-President Yemi Osinbajo with some traditional rulers “so that together we can proffer solutions to the lingering security problems in the South-West and other parts of the country.”
He added: “These consultations are important because traditional rulers form a critical part of governance structures, especially in their respective communities, where they feel the pulse of the people being the closest to the populace at the grassroots level.

ALSO READ:  I am contesting for governor to rescue, build new Kogi ― Melaye

“As a government, at all times, we need your active collaboration as we continue to deal with crimes of kidnapping, banditry and other forms of unlawful and criminal attacks resulting in needless deaths and causing fear among our people.
“There are some who might want to cause instability and difficulties, but we are very confident that God willing and working together as a nation, we will be able to overcome such difficulties and all our problems and set our country on the path of peace and prosperity.”
Drawing attention to the fact that “the dynamics for safeguarding security keep changing,” President Buhari noted that “we must adapt our strategies to these challenges as well as adopt modern, technological and people-centred methods in achieving these goals.”
According to the President, “When Nigerians voted massively for us in 2015, we focused on three areas – security, economy and fighting corruption. We have not relented on this promise and we will not.”
Speaking further, President Buhari stated: “Let me be very clear about our firm resolve to change the security architecture of Nigeria. It is one of the top priorities for this government but we won’t be able to achieve this goal without the support and input of you, our royal fathers.
“As the traditional authorities in your communities, government and the security agencies will be relying on you to monitor the several different communities and people coming in and out of your areas.
“We hope that, for instance, traditional rulers would be able to observe new entrants into the community by requesting leaders of such ethnic groups to notify the traditional authorities of new intakes, thereby creating the opportunities for the gathering of actionable intelligence which tracks such movements in and out of communities thereby offering early warning signals.”
Outlining some of these interventions, President Buhari said they “include an expedited commencement of community policing, a robust revamping of police intelligence gathering capacity and the significant boosting of the numbers of security personnel in our local communities. This in specific terms will include recruiting a lot more police officers and doing so right from their local government areas, where they would then be stationed in the best practice of community policing.”
According to him, “We will equally continue to bring in our military when needed to complement the work of the police including the possible deployment of troops on certain highways on a temporary basis, and the use of the Air Force assets to bomb hideouts where criminals are located.”
Admitting that these measures are inter-related and have to be well-coordinated, he stressed that, “the speedy implementation of community policing will facilitate a more effective collection of intelligence. This is especially in the area of a more useful and effective intelligence-gathering process that traditional rulers will play some of the most critical roles.”
Earlier, the Ooni, as well as other traditional rulers with him,  had individually apprised the President with security challenges they were facing in their domain and called on the President to support their efforts in addressing the issues.
Speaking to State House correspondents afterwards, Oba Ogunwusi affirmed that arrangement was being made to deploy drones and CCTVs to boost the security of lives and properties in the South West.
He said: “Another milestone we achieved is that Mr President will fast track very rapid monitoring of our forests by virtue using the technology of modern standard, the drones. The various security agencies will rally round the IG and see how it can be properly deployed.
“Another thing is that they will install CCTV along our highways, the IGP said they are very aggressive about clearing our highways now.
“We believe that with all these there will be a reduction in the tension in the Southwest because the Southwest is very sensitive in Nigeria.
“We don’t pray for crisis or war or uprising because it will snowball into a lot of things, that is why we are all represented from the six states that make up Southwestern Nigeria.
“We thank God that Mr President is listening and so far so good, we are seeing the light at the end of the tunnel.”

Aregbesola can preside over any ministry, department ― APC chieftain, Umar Farouk, others