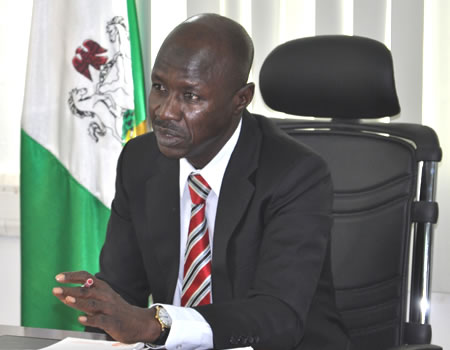 Ibrahim Magu, the Acting Chairman of the Economic and Financial Crimes Commission, (EFCC),  on Saturday, called on Nigerians to vote for honest politicians.
Magu also called on Nigerians to vote only for honest politicians in the next general election, irrespective of their political affiliations.
“Don’t vote for anybody who is not honest, irrespective of the party he or she belongs to. We should vote for people who are honest and who believe in this country. We need to protect our children from the mess that we have created,” Magu said.
He also said looters and the corrupt people no longer have a hiding place, vowing to go after them.
Magu who spoke during the second induction and investiture ceremony of the Compliance Institute of Nigeria, (CIN), in Lagos charged stakeholders in the anti-graft war to be alert to their responsibilities.
“We need to wrest our Commonwealth from the grasp of the looters,” the acting EFCC chairman said.
The EFCC boss who was inducted as a Fellow, Compliance Institute, Nigeria, FCIN, described the compliance professionals as corruption hunters.

“You are also corruption fighters in your own right”, he said.
“We should not leave it to the anti-graft agencies alone. It is our responsibility as Nigerians to join in the fight. It is incumbent on all Nigerians to fight corruption. In fact, Nigerians should take the ownership of the fight against corruption”, he further said.
Magu also called on Nigerians to vote only for honest politicians in the next general election, irrespective of their political affiliations.
Earlier in his address, the Institute’s President and Chairman of the Board, Pattison Boleigha, described the event as yet another giant stride towards actualizing Nigeria’s efforts to stem the scourge of corruption, defeat terrorism, instil discipline and a culture of compliance in Nigeria.
“Let me emphasize that your induction as professional members have imposed on you the challenges of having to,  henceforth,  stand tall in integrity,  impeccable in character,  professional in service, alert to global trends and uphold high ethical and professional standards,” he said.