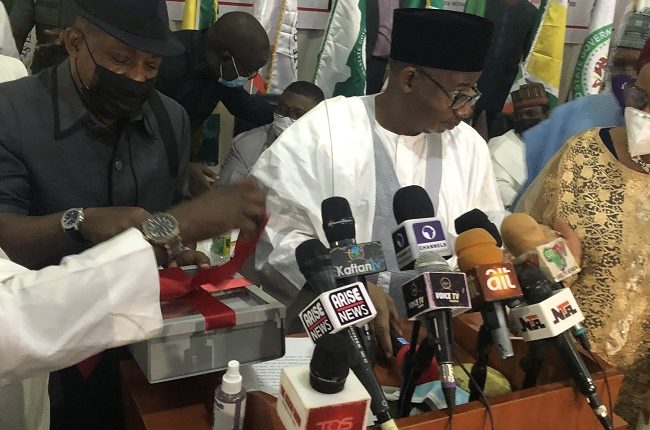 The Peoples Democratic Party (PDP) 2019 Election Review Committee led by Governor Bala Mohammed of Bauchi state on Wednesday submitted its report in which it recommended that the presidential flag bearer in the 2023 election should be chosen through a merit-based system.

Making this declaration while presenting the report to the national leadership of the party led by the National Chairman, Prince Uche Secondus at the party national secretariat in Abuja, Mohammed however acknowledged the valid argument that holds that the northeast or the southeast be given strong consideration because they are the geo-political zones with the shorted stint in power till date.

He said the PDP must conduct a credible national presidential primary as he maintained that there are capable individuals all around the country who can provide Nigeria the required leadership to pull it out of the present quagmire.

The committee also recommended that the PDP should set aside a certain percentage for youth and women in elected and appointive offices.

It also called on the party to endorse the outcome of the 2014 National Conference or in the alternative, support the call for a new one.

The committee lamented the role of the military in the conduct of elections in the country and advised that while the military must be insulated from politics, the police must be impartial during the exercise.

The committee similarly recommended that the PDP should actively pursue restructuring that fosters decentralization, national unity and security of lives and properties.

The Bauchi governor stated: “Whether we like it or not, we have come to a moment of truth. Therefore, to reclaim the national mandate and guarantee stability and progress of this great nation, it is our considered position that our party must return to those truths that endeared stakeholders buying into its programmed that endeared it to the generality of Nigerians, and that conferred on it the moral authority to speak without fear of being contradicted.

“The summary of our report is that the party must promote practices that will deepen democracy, promote national unity and inspire great faith in our country especially among our youths and the several stakeholders’ groups yearning for inclusion.”

He added: “Cognizant is the generational and gender shift all over the globe and the emergence of a new generation of Nigerians, who are not held down by religion, ethnicity and such other primordial considerations but who are determined to mainstream the country into global best practices, the party should set aside a certain percentage of elective and appointive offices for youths and women.

“The #EndSARS movement a few months back was the testimony we needed that a new generation of young, bold and ambitious and detribalized Nigerians have taken centre stage and that their legitimate clamour for inclusion and good governance can only be ignored at the peril of the party or Nigeria.

“In line with one above, the party must strongly resolve to promote internal democracy, discourage godfatherism and ensure that the will of the people prevail in the choice of candidates to run for electoral positions. That, in our view, the cornerstone in which electoral success can be seamlessly sustained.

“Further to the two above, our great party should continue to lead by example. Our past record which ushered in an era of economic growth was only made possible because we had members in elected and appointive positions who performed very well.

“It goes without saying that those of us who are privileged to hold offices in this fight must see themselves as image-makers of this party whose actions or inactions could determine future successes or otherwise of this party.

“In line with certain unwritten conventions of the nation’s history, many people think that for fairness and equity the northeast and the southeast geopolitical zones that have had the shortest stints at the Presidency should be given special consideration in choosing the presidential flag bearer of the party in 2023 election.

“While we admit this is a very strong argument, we should not lose sight of the fact that Nigeria is endowed with many capable and very experienced leaders in every part of the country.

“Moreover, the exigencies of the moment demand that nothing should be compromised in choosing the leader with the attribute to disentangle the country from the present quagmire.

“Therefore, we think that every Nigerian from every part of the country should be given the opportunity to choose the best candidate through a credible primary election as a way of institutionalizing a merit-based leadership recruitment process for the country and for the party.

“The endemic friction of inter-governmental especially the federal and the state governments suggests that the present constitutional arrangement is grossly inadequate to contend with pending demography and democratic challenges. Our party must therefore push for either a review and endorsement of the 2014 Constitutional Conference Report or for a new constitutional conference to be organized.

“In short, the party should advocate for genuine structuring that fosters decentralization, engenders national unity, guarantees the security of lives and properties for all Nigerians no matter where they reside in the country and which promotes economic prosperity and overall well-being of our dear people.

“The party should actively encourage the current reform by the Independent National Electoral Commission (INEC) to make it truly independent and to be able to conduct elections devoid of coercive apparatus of the state and hand manipulation and outright intimidation of voters.”

In his remark, the National Chairman of the party, Secondus, assured that the report would form the bedrock of the PDP’s plan for 2023 general elections.

He stated: “I have no doubt in my mind that your report will form the bedrock of our party’s plan ahead of 2023 general elections. The NWC is going to study and analyze your report meticulously and come up with a position that will be beneficial to the party.

“The PDP is putting no stone unturned to ensure it regains federal power and this report is going to be the take-off point and keystone to our subsequent actions ahead of 2023.

“We urge President Muhammadu Buhari and his APC administration to embark on immediate electoral reform that will ensure free, fair and transparent elections in the country and put Nigeria in parity with other developed democracies in the world.

“Having failed roundly in the delivery of any dividend to Nigerian people, and has brought the country to a status of a failed nation with an unprecedented collapse of all structures, APC knows as a fact that Nigerians would not want to do anything with them again.

“As a result, they are putting all studs on the way to conducting credible elections. But we need to warn that the only thing keeping this country alive today is the fact that APC will be history by 2023.

“They are aware of this reality and they are trying to use their usual propaganda to create a different image of themselves, but Nigeria knows better and cannot be fooled again.

“Relying on the recommendations of this report, the NWC will work with think tanks, consultants and all critical stakeholders of our great Party to enhance the new PDP narratives that will help address the yawning absence of leadership in the country.

“We will continue to build the party along the line of the recommendations with a view to cultivating a wide support base with utmost urgency towards 2023.”