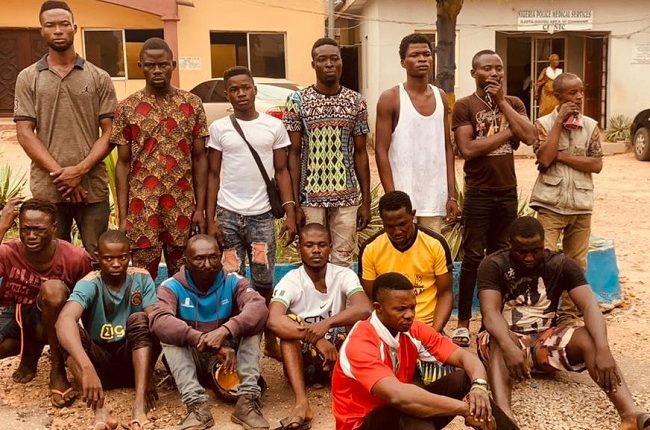 No fewer than ten persons, suspected to be members of two rival cult groups were early Wednesday injured as three groups clashed in the Ikosi area of Ketu in Lagos.

Fifteen persons said to be members of Eiye Buccaneers and Aiye confraternities have been arrested in connection with the early morning mayhem.

The three groups shot sporadically and wielded dangerous weapons as they chase members of rival groups in different parts of Ikosi.

The early morning clash created serious confusions as residents and passers-by were forced to scamper into different places for safety.

The Nigerian Tribune gathered that the Eiye and Aiye members had before now been at loggerheads over superiority, but that another group of cultists joined them on Wednesday.

The Wednesday clash was said to have started over the control of the fruit market in Ikosi, with each of the groups attempting to control revenue generation at the market.

The image maker in charge of the state police command, Muyiwa Adejobi said ” the Lagos State Police Command has restored normalcy to the Ikosi/Ketu area of Lagos State after a clash that occurred today Wednesday 17, March 2021, at 6:00 am amongst some suspected cult groups. Eye, Aiye and Buccaneer, as fifteen (15) suspects were arrested.

He added that “Two (2) locally made pistols, some live cartridges, assorted charms etc, were recovered from the suspects.”

The police confirmed that “preliminary investigation revealed that the crisis was connected to the revenue generation at the Ketu fruits market, and efforts are in top gear to apprehend other fleeing members of the gangs, that orchestrated a crisis in the area.”

The Commissioner of Police, Lagos State, CP Hakeem Odumosu, had deployed policemen including the Rapid Response Squad (RRS) and Taskforce to the area to quench the crisis and restore normalcy to the area.

The police boss has also ordered that the suspects be transferred to the State Criminal Investigation Department, Panti, Yaba for discreet Investigation.

The Commissioner of Police has however reiterated the command’s commitment to fighting crimes and criminality, especially cultism, in the state. He stated that the command will harness all legitimate means to suppress cultists’ activities in the state.