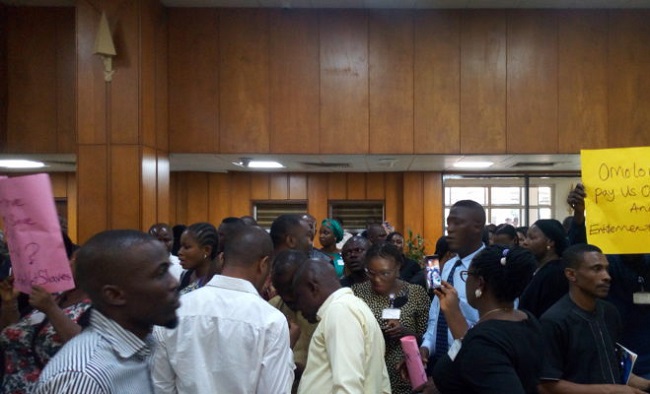 Planned peaceful assembly in protest of non-payment of salaries to 50 per cent of legislative aides was shelved as the management responded by sending payment schedule to banks.

Zebis Kekung, South-South representatives of Salary Arrears Legislative Aides (SALA) on Wednesday said this to Tribune Online in an interview.

According to him, the security department of the National Assembly waded into the matter, late Tuesday, met with and assured representatives of the peaceful and agitating legislative aides that he has the mandate of management to speak with them that payment would be made on or before December 21.

“As I speak with you, some of our members have received an alert of salary arrears” the basis for our agitation.

The group had earlier in the day issued a statement announcing the cancellation of her protest in peaceful assembly.

The statement entitled “Suspension of Planned Protest’ reads in part: “As you are aware, on Monday, 14th December 2020, we issued a 48-hour ultimatum to the Clerk to National Assembly on the need to pay 2019 salary arrears owed Legislative Aides.

“As a result of the notice, we were invited by relevant agencies, particularly the DSS for some sort of resolution. As a precondition to call of our action, the Director of the DSS Mr Ahmed, promised to reach out to the management and extract a commitment.

“Today, a representative of the affected Aides met with the DSS Director who unambiguously gave us a commitment that the Management has promised to pay the 2019 arrears as promised ‘on or before the 21st of December, 2020”

“As responsible and peace-loving stakeholders, we are inclined to rely on the commitment of the DSS Director who in any case has displayed uncommon traits of sincerity, candour and empathy. We have no cause whatsoever to doubt his words.

“On the strength of this conviction, we met and after a dispassionate reappraisal, we have decided to shelve the proposed mass action until at least the 22nd of December. This is in deference and out of respect for the Director,” the statement stated.

The British Parliament at the Westminster Hall held a debate on ‘e-petition 554150, relating to Nigeria and the sanctions regime’ on Monday. The government of the United Kingdom has however responded…Unpaid Arrears  Unpaid Arrears

The surprise visit made on Friday night by the leaders of the ruling All Progressives Congress (APC) to former President Goodluck Jonathan at his residence in Abuja triggered a stir in the major political camps, resulting in at least four possible theories..Unpaid Arrears Unpaid Arrears