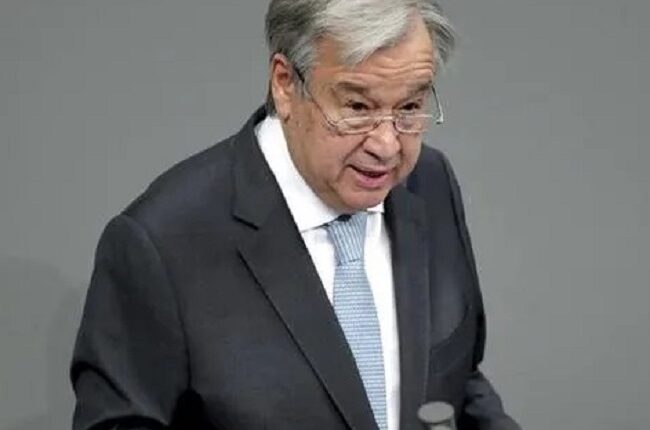 United Nations Secretary-General, António Guterres, has reiterated his stance that the world is fast slipping away from the goal of limiting global warming to 1.5 degrees Celcius, adding that a new approach is needed for the goal to be attained.

Guterres has therefore proposed a Climate Solidarity Pact with the world’s most developed countries, known as the G20, who are meeting at the G20 Summit in Bali, Indonesia, on Monday.

He said, “Our world is facing the most pivotal, precarious moment in generations. People everywhere are getting hit from every direction – battered by runaway climate change and squeezed by a cost-of-living crisis. Geopolitical divisions are triggering new conflicts and making old ones even more difficult to resolve. The G20 is ground zero for bridging divisions and finding answers to these crises and more. First, climate – the defining challenge of our age. I have just come from the COP27 Summit in Sharm el-Sheikh. The goal of limiting global temperature rise to 1.5 degrees is slipping away. We are dangerously close to tipping points at which climate chaos could become irreversible. Science tells us that global heating beyond that limit poses an existential threat to all life on earth. But global emissions, and temperatures, continue to rise. I tend to agree that insanity consists in doing the same thing over and over again and expecting a different result. We need a new approach.”

Guterres added that he has “proposed a historic pact between developed and emerging economies – a Climate Solidarity Pact that combines the capacities and resources of developed and emerging economies for the benefit of all. G20 countries are responsible for 80 per cent of global emissions. G20 leaders can make or break the Climate Solidarity Pact.

“Under this pact, they would make extra efforts this decade to keep the limit of 1.5 degrees alive. Wealthier countries and international financial institutions would provide financial and technical assistance to help emerging economies accelerate their renewable energy transition. The Climate Solidarity Pact can save lives, livelihoods, and our planet.

“It can help end dependence on fossil fuels while providing universal, affordable, sustainable energy for all.”

He also spoke on the war in Ukraine and the attendant energy crisis. He said the crisis is an opportunity for the fastest transition to renewable energy.

He said, “On energy, the war in Ukraine has clearly demonstrated the dangers of our addiction to fossil fuels. It is the best possible argument for the fastest possible transition to renewable energy.”

The European Union and 19 other nations make up the G20, sometimes known as the Group of Twenty. It strives to address important global economic concerns like international financial stability, reducing greenhouse gas emissions, and promoting sustainable development.