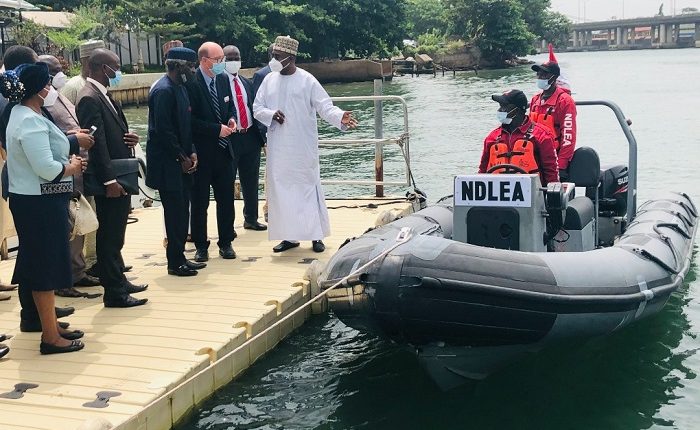 The British Deputy High Commission in Lagos, working in association with the UK Border Force, Ministry of Defence (MoD) and the National Crime Agency (NCA), have donated a Rigid-Hull Inflatable Boat (RHIB) to the National Drug Law Enforcement Agency (NDLEA).

According to a statement by the Commission, the RHIB was presented to the NDLEA chairman, General Mohammad Marwa by the British Deputy High Commissioner in Lagos, Ben Llewellyn-Jones on the US Consulate General’s Jetty in Walter Carrington Crescent, Victoria Island, Lagos,  16, March 2021.

The US Consul General, Claire Pierangelo and the Director of Sea Ports, Omolade Faboyede were also in attendance during the handover.
Speaking at the unveiling event the Head of Mission at the Deputy British High Commission in Lagos Ben Llewelyn-Jones said:

“Sadly, we know that Nigeria and specifically Lagos port can be both a destination point and a transit location for illegal goods and the illegal movement of people. We have already seen the significant impact that Nigerian law enforcement can have to tackle these crimes.

“We saw this effectiveness as recently as November 2020, at a Lagos beach where the NDLEA Marine Unit seized 704 kilos of cannabis from a fishing vessel that had arrived from Ghana. Many of the illegal goods that enter or pass through Nigeria are destined for Europe and the UK. So, it is also in our interests to continue our longstanding co-operation with the NDLEA and other Nigerian law enforcement agencies more broadly.

“We hope this vessel and the wider effort and support we are giving, working with the NDLEA and other Nigerian agencies, can help to tackle crime effectively and help to bring the perpetrators of such crimes to account. We would like to especially thank the United States of America’s Consulate General for the use of their Jetty for today’s official handover ceremony.”

U.S. Consulate General Lagos, Consul General Claire Pierangelo said: “I am happy to be here with our great partners, the Nigeria Drug Law Enforcement Agency, as well as our British partners, the United Kingdom Border Task Force, to highlight the great cooperation we have at the Nigeria seaports to investigate transnational criminal organisations. We work very hard to combat transnational crime and the illicit trafficking of goods in all forms – including narcotics, weapons, human, and wildlife trafficking, which presents a major security and economic challenge for the United States, Nigeria, the UK, and our allies.

The provision of this fully operational rigid inflatable boat (RHIB) will greatly improve the NDLEA’s already effective capability to patrol and intercept vessels of interest and detect criminality that operates in and around the waterways surrounding Lagos. The deployment of the NDLEA patrol RHIB will deter criminals and reduce maritime crime such as drug smuggling, piracy, robbery and kidnapping.