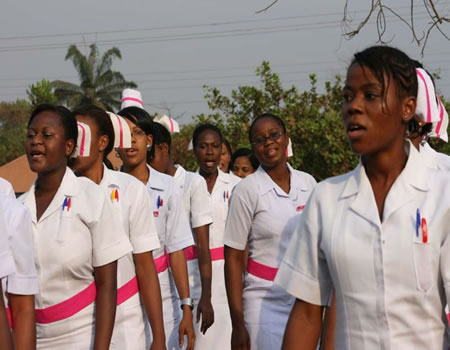 THE University of Ibadan (UI) has inducted 44 new nurses into the Nigerian health workforce with a charge that they should be good ambassadors of the university and contribute to national health care development.

University of Ibadan’s acting vice-chancellor, Professor Adebola Ekanola,  speaking at the induction ceremony for the university’s Bachelor of Nursing Science graduates said this new phase of life demands that they put into use their experience of the past, hard work, will and  determination to ensure they excel in the profession.

Professor Ekanola, speaking through the provost, College of Medicine, University of Ibadan, Professor Olayinka Omigbodun, said the department would transform into a faculty soon and urged the new nurses to work in synergy with other members of the health team in delivering care to Nigerians.

The Registrar, Nursing and Midwifery Council of Nigeria, Alhaji Faruk Abubakar, while formally receiving the inductees into the nursing profession, said they should keep to the ethics  and etiquettes guiding this profession as well as the oath of providing care, regardless of race, religion and diversities of patients.

Alhaji Abubakar, represented by Dr Yahaya Sanni, urged them to promote health, prevent illness and refrain from actions that can endanger or is deleterious to life.

President, Ibadan College of Medicine Alumni Association (ICOMAA), Professor Dipo Otolorin, challenged them to emulate the likes of Florence Nightingale and exhibit clinical empathy as they work with other members of the health care team.

Professor Otolorin stated that empathy and compassion are associated with better adherence to medications, reduce malpractice, fewer mistakes and increased patient satisfaction and urged them to support improving patients’ experience during childbirth

At the induction ceremony that had four of the inductees graduating with first-class honours, Mr Isaac Olabanjo, the only male nurse in the group, recounting his training experience  as a nurse said “It was wield, lonely and tough.”