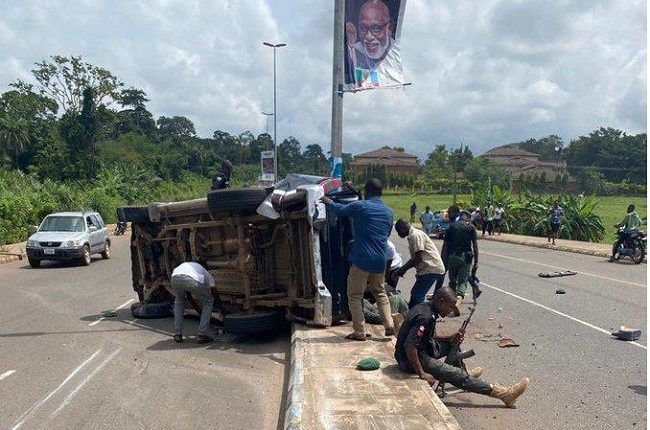 Apart from those who lost their lives in the accident, three other policemen were seriously injured during the fatal accident were rushed to the hospital.

Tribune Online gathered that the accident was as a result of over speeding while the driver of the vehicle lost control, somersaulted and crossed to the other side of the road.

An eye witness said the Hilux van somersaulted several times before hitting a pavement while some of the policemen in the vehicle were flung out of the car.

It could not be confirmed if the victims were returning to their base after the last Saturday governorship election in the state, as some of their personal effects were still in the vehicle.

The Ondo Police spokesman, ASP Tee-Leo Ikoro, who confirmed the accident said “we lost two of our men to the accident.

“But the other person who sustained different degrees of injuries are in stable conditions now at the Police Clinic where they are receiving treatment.”

A spokesperson for the Ondo Sector Command of the Federal Road Safety Corps, Omotola Ogungbawo, said only two of the policemen lost their lives in the accident while eight others sustained injuries.

She explained that the accident was caused due to speed violation while the tyre of the vehicle burst on motion,  and the driver of the vehicle lost control.

According to her, the lone accident which involved a blue Nissan Bus pick up with registration number NPF 9557C, with 12 passengers was heading towards the Airport road when the accident occurred.

She said all the affected victims were taken to the General Hospital while the remains of the dead victims had been deposited at the morgue.

Senate observes one minute silence for victims of #EndSARS protest