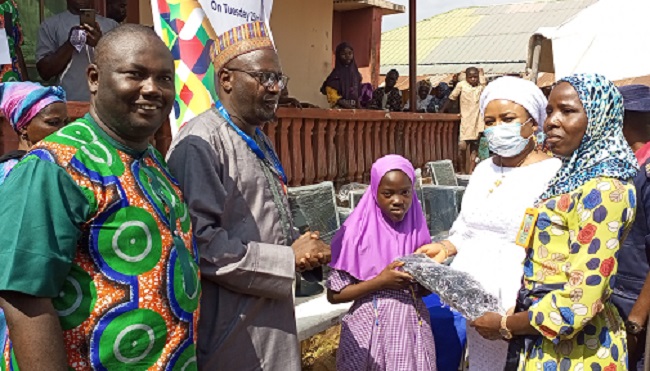 The traditional ruler of Orangun Oke Ila, Oba Adedotun Abolarin, has canvassed massive educational development of grassroots areas of Kwara State as a catalyst for quality socio-economic transformation of the area.

Speaking at the unveiling of an empowerment programme, tagged KOZ intervention in Igbaja town in the Ifelodun local government area of the state, the traditional ruler, who owns a tuition-free school, called on education stakeholders to do more at helping brilliant but indigent students in their communities.

Oba Abolarin said that the society is troubled because some haves do not care whether others have or not.

“Why won’t there be an increasing number of bad elements in our society? We should care more about future of our young generation. We should stop complaining about the government’s inadequacy. Let’s do our bit and develop our people for better future,” he said.

The traditional ruler also commended the Senior Special Assistant on Community Intervention to Kwara State governor, Hon. Kayode Oyin-Zubair, for his donation of computer systems, food items, school renovation, among other activities, saying that “we can turn our state to cynosure of all eyes if we develop education of our future ones.”

Also speaking, the donor, Hon. Oyin-Zubair said that computer system were donated to five schools in the area, adding that “it’s suicidal to churn out students without computer education in this age.”

He also said that he has implemented classroom renovation and provided classroom infrastructure such as chairs and tables .

Oyin-Zubair also said that over 200 boreholes were rehabilitated and some youths trained on how to repair boreholes in the state.

In her speech at the event, the state deputy governor, represented by the state Commissioner for Communications, Mrs. Abosede Ibrahim, commended the donor, saying that the gesture was capable of weakening the force of poverty.

“I do know that Kayode Oyin-Zubair Intervention Office is to furnish the have-nots or the impoverished with good news and the instrument to weaken the force of poverty.

“This initiative is people-oriented, determined to lift the people from the level of dearth to the improved status of economy.”

In his keynote address, the Nigeria ambassador to France, Ambassador Kayode Laro, described Oyin-Zubair as a committed grassroots man, saying that his intervention in grassroots development is capable of making a difference in the rural communities in state.

Laro also said that the governor’s aide has made impacts in various rural communities in the state in such areas as sinking and repair of boreholes, training of community development, sourcing N160 million Aliko Dangote fund which, he said, was disbursed to 16,000 rural women, as well as distribution of tricycle to transporters.

FCT Secondary Education Board advocates acquisition of skills for students