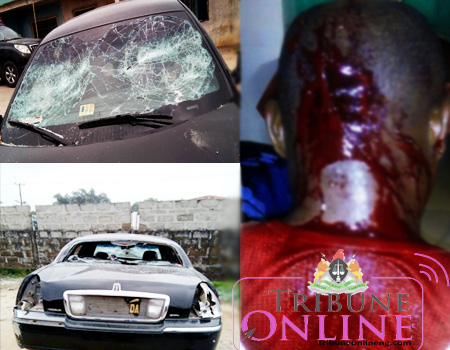 THE traditional ruler of Igbokoda, in Ilaje local government area of Ondo state, the Olu of Igbokoda, Oba Afolabi Odidiomo, on Thursday night escaped being assassinated as armed men suspected to be thugs attacked and injured him.

An eyewitness who spoke with our correspondent stated that armed thugs invaded the residence of the High Chief in the town where the monarch was holding a meeting with cutlasses, knives, cudgels and guns.

He explained that the thugs started shooting into the air to scare the residents who ran for safety saying the monarch and some of his aides were seriously injured during the attack.

According to him,  the driver of the monarch,  some palace boys who escorted the monarch to the meeting were injured while the monarch’s car was damaged by the hoodlums.

He said “there were no security agents on ground to check the activities of the thugs while the whole attack lasts” but said some people had to rush the traditional ruler to the hospital to save his life.

He described the attack on the monarch as an abomination, saying the hoodlums have desecrated the exalted stool of the town and disrespect the whole people and residents of the town.

Speaking on his hospital bed, Oba Odidiomo explained that he had earlier visited the Mahin Kingdom in the local government area with some two other traditional rulers who included, the Odode of Gbegunrin, Oba Philip Kalejaye and Molokun of Atijere, Ona Samuel Edema, to deliberate on a succession plan for the vacant traditional stool of Mahin Kingdom.

He said he visited one of the High Chiefs in the town, Chief Lebi Adepiti, to brief him on the development when the ugly incident happened.

He specifically pointed an accusing finger to one Tale Iwatan for leading the hoodlums to unleash terror on the meeting, saying the leader of the group had attacked him and the palace several times.

He said “I came back to Igbokoda in the evening and visited one of the High Chief of the town to brief him on the development and outcome of the meeting. But I hardly entered the room when Tale Iwatan stormed the meeting with large number of armed bearing thugs who came with cutlasses, knives and guns.

“They shot sporadically into the air to scare away people and I came out to meet about five of them and I called the police in the town,  but before the policemen could arrive at the scene of the incident which is also a stone throw to the Nigerian Naval base in Igbokoda, the hoodlums had mobilised more men and attacked us.

“These men numbering about 20, started attacking us and rounded me after injuring others and one of them stabbed me directly at the back of my head after shooting severally, and as if this is not enough, one of them used the cudgel to hit my head at the same time and I passed out.

“They waited for about ten minutes to confirm if I was dead and the leader of the group, Tale Iwatan, confirmed and pronounced me dead before they left the scene but not without destroying my car. “

The monarch said it took the policemen in the town some 50 minutes before getting to the scene of the incident after he made a call through to the station.

He alleged some influential personality within the town of sponsoring the attack on him saying the notorious leader of the group, Tale, was shielded from facing the wrath of law many times by his sponsors.

He stated that similar attack was carried out by the same gang in 2014, when five people were killed in his palace and all effort to arrest and prosecute the leader of the gang by the law enforcement agents were blocked by some of the influential personalities in the area.

He, however, said he was revived at the State Specialist Hospital in Igbokoda before he was transferred to another hospital where he has been receiving treatment

He disclosed that two of the hoodlums have been arrested by the police in the town while the kingpin and some of his gang have fled the town.

The Police Public Relations Officer (PPRO),  Femi Joseph, who confirmed the development said two of the hoodlums have been arrested by men of the state command in Igbokoda.

He explained that the incident occurred around 5:00 pm on Wednesday when Tale Iwatan led some four other notorious thugs in the town to Chief Adepiti residence where the monarch was holding a meeting.

The police image maker, however, said detectives from the command have been on the trail of the two other thugs and Iwatan who fled the community immediately they carried out their dastardly act.

He assured that the hoodlums would be brought to book saying normalcy has returned to the coastal community of Igbokoda after the arrest of the suspected thugs.