The Nigerian-Americans who won in US 2020 election 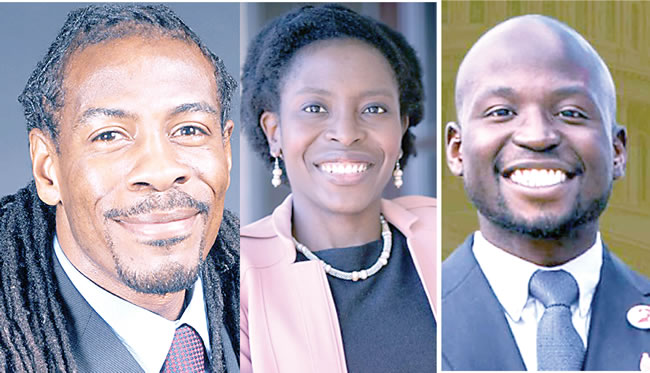 Over the years, Nigerians in the diaspora have continued to make their country proud in different fields such as medicine, engineering and so on, with the latest being three Nigerian-Americans, who excelled in their political careers.

Oye Owolewa was elected as a shadow member of the House of Representatives from the District of Columbia after winning with 164,026 votes which represent 82.84 per cent of total votes against Joyce Robinson-Paul, who had 18,600 votes, and Sohaer Syed with 15,372 votes.

He contested on the platform of the Democratic Party as a ‘shadow’ (non-voting) House of Representative member out of the District of Columbia (DC).

The 31-year-old was born in Nigeria, to a father from Omu Aran in Kwara State and a mother from Ilesa in Osun State and was raised in Boston where he attended Boston Latin School and graduated in 2008. He holds a doctor of philosophy (PhD) degree in Pharmacy from the Northeastern University, Boston.

He became the first Nigerian-American to occupy the seat.

As the results poured in, Mr Owolewa shared the news of his victory on his social media pages.

He wrote: “Good morning. Looks like we did it! I want to thank everyone, from family and close friends to DC residents. Because of your contributions and sacrifices, I stand before you as America’s first Nigerian-American congressman.

“In this role, I’m going to fight for DC statehood and bring our values to the lawmaking process. While today is the day for some celebration, the hard work also follows. Again, thanks so much for everything. I wouldn’t be here without y’all.”

Owolewa was in 2018, elected commissioner of his neighbourhood in Southeast DC where he served as the medium between the community and the local government. During this period, he also advocated for the District’s statehood with the launch of TaxFreeDC- a movement that aims to combat DC’s taxation without representation.

For Esther Agbaje, who was elected into Minnesota House of Representatives in the United States election, her political career started as one of public service.

“So, I had previously worked as a foreign affairs officer with the United States Departments of State, working on rule of law programming, which was about supporting local organisations as they were seeking to make a change in our communities, particularly from the perspectives of protecting freedom of assembly, freedom of expression, protecting the rights of women and advancing youths access to capital for youth entrepreneurs.

“When I returned to the US, I wanted to work on domestic issues, so I went to Law School. In Law School, I also spent time doing legal aids, particularly in the housing contacts. So I think part of jumping into politics was to ensure that there were voices at the table that understood what working people needed, particularly from my housing perspectives and also from the living wage jobs, health care, education and making sure that we have those people at the table, making decisions for many of our vulnerable communities,” she told Saturday Tribune in an interview.

Agbaje, who contested to represent District 59B in the Minnesota House of Representatives on the platform of the Minnesota Democratic-Farmer-Labor Party (DFLP), an affiliate of the Democratic Party, won with 17,396 votes.

She is interested in prison reforms, fighting racial discrepancies, housing and others.

In college, Agbaje worked to advance labour rights. In graduate school, she helped build healthy and sustainable communities. In the State Department, she managed programmes advocating for civil rights, and in Law School, she defended tenants from eviction with the Harvard Legal Aid Bureau.

Announcing her victory on Twitter, she wrote “I’m honored to have earned the support and trust of my neighbours to serve as their representative for #MN #HD59B. From North #MPLS to North Loop, Elliot Park to Bryn Mawr, I will work hard everyday to represent this entire district with empathy, compassion and pride. #ThankYou.”

Born to Nigerian parents – an Episcopal priest and a librarian – Ms Agbaje became the first Nigerian-American to be elected to the Minnesota legislature.

Come 2023, Agbaje said she hopes that people’s voices in Nigeria are heard and that they get their results and they organise well.

Nnamdi Chukwuocha also won re-election as a member of Delaware House of Representatives from District 1. He contested unopposed and won 100 per cent with 7,640 votes.

Chukwuocha is the current poet laureate of Delaware and was first elected into the state house of representatives in 2018 after defeating incumbent Charles Potter Jr. at the Democratic Party primary.

He holds a bachelor’s degree in history and a master’s degree in social work from Delaware State University and he has several years of experience in local politics in the state.

He once served on the Wilmington City Council as President Pro Tempore and Chair of the Education, Youth and Families Committee.

Interestingly, Chukwuocha is half of the Twin Poets, a spoken word duo with his brother, Al Mills. They are the recipients of numerous awards and grants.

Other Nigerians who contested for other seats but did not win are: Yomi Faparusi, an Ibadan-born native of Ode-Ekiti in Ekiti State; Yinka Faleti from Lagos; Paul Akinjo from Ondo State; Adewunmi Kuforiji from Ibadan, Oyo State; April Ademiluyi, Ngozi Akubuike and Benjamin Osemenam.

How Nigeria can manage another wave of COVID-19 pandemic —Akinde, medical doctor and leader of TNCI

My 2018 predictions about Buhari’s “Next Level” is materialising

How I made First Class in law school against all odds

Sometimes, I broke down to the point of tears —Paul-Okpara, San Jose Varsity’s…