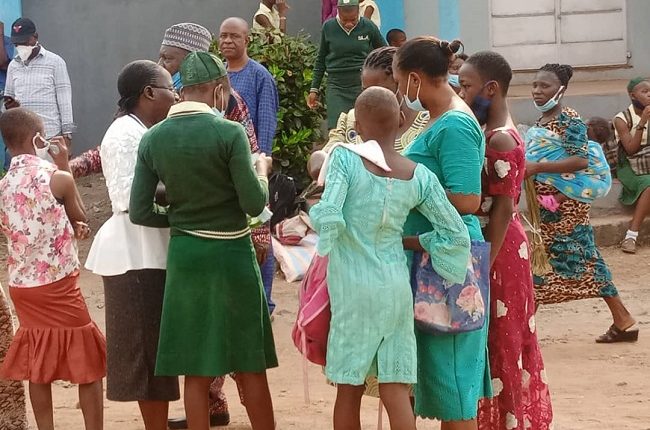 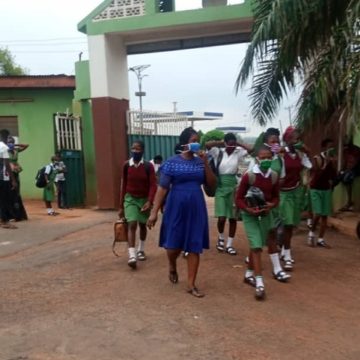 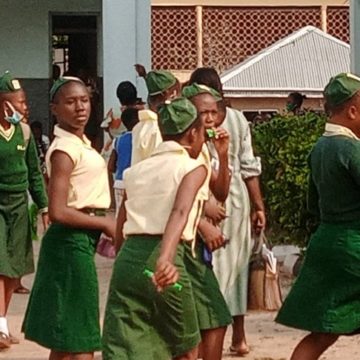 As schools across the country resume for academic activities, most students, teachers and parents in Ondo State, on Monday, failed to comply with the COVID-19 protocols.,

Tribune Online noticed that most of the students returning to schools after weeks of the holiday which was commissioned by the second wave of the COVID -19 did not adhere to the directives of the government on COVID-19 guidelines.

In some of the schools visited, many of the pupils, as well as their teachers, did not bother to use their nose masks and those who were with nose masks hung it below their chin for formality, while the social distance rule was also flouted.

At Oyemekun Grammar School, Akure, our correspondent noticed that the school stationed buckets of water, soap and sanitis\ers at the entrance gate of the school for those coming into the school, especially the new intake and their parents. 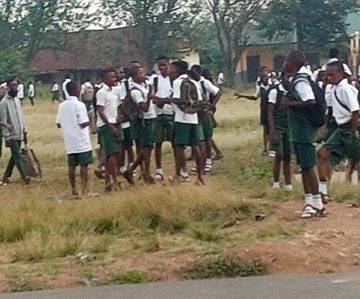 Some of the parents who were eager to register their wards for the new academic session did not bother to make use of the items provided at the main entrance of the school.

However, it was observed some returning students after gaining entrance into the school, removed their nose masks and were seen in the cluster and moving in groups without adhering to social distancing rules.

At Eji-Oba High, Oba-Ile in Akure North, Local Government Area of the state, there was zero compliance as students and teachers and the parents of the new intake were seen moving around freely.

It was observed that there was no buckets of water, soap and hand sanitisers at the school entrance and within the school premises as directed by the state government, just as teachers and students move freely without any usage of nose mask.

Speaking on the development, the Principal of Oyemekun Grammar School, Mr Ogunleye Okeowo, threatened that students who floated the guidelines would be sent out of the school.

He said: “We have to abide with the rules of COVID-19 protocols. Coronavirus is real and we must not joke with it. Maybe because of ignorance, some people don’t even believe in it. It’s real, and that is why you saw buckets of water as well as soap and sanitisers across the premises of the schools.

“As for students who removed their face masks while in the school premises, we are going to deal with them. These boys, after coming in, they remove it and keep it in their pockets.

“We’ve been telling them since the last term that they have to come with their face masks. If we see any of them without a face mask, we’ll have to send them back home.”

But one of the parents, Mrs Toyosi Olaniran, noted that arrangements put in place by schools were inadequate and suggested that the new students ought to have resumed before the returning students and expressed displeasure over the development.

He said: “This disease is real and it’s killing. But from what we’ve seen, the parents, especially are not taking it seriously. Most of them allow their children to resume without a face mask and some basic things.

“Why take such a risk? For the teachers who are parents too, they should do what is expected of them as parents.

“Where we don’t meet the required standard, we won’t allow such schools to operate, until the situation is rectified.

“Today is the first day of resumption, we will still brainstorm on what to do on the issue of clustering among the students. There will be a way out, that I can assure. We are not going to take any risk.”

Over 15 million Nigerians use hard drugs, says Marwa, as he resumes as new NDLEA boss