As NEC agrees on compensation for herders/farmers' clash victims 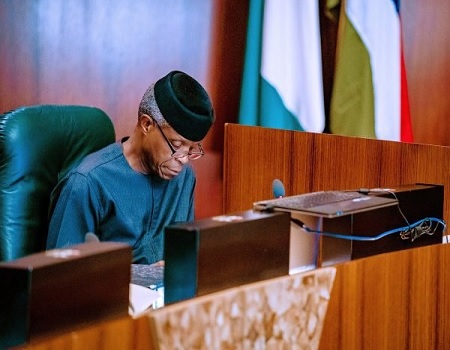 It has also agreed to pay compensation to victims of herders/farmers clashes whose properties were destroyed in their various jurisdictions.

This was part of the decisions reached during a meeting of the council presided over by Vice President Yemi Osinbajo at the presidential villa, Abuja on Thursday.

Speaking on the matter at the post-council meeting press briefing, the governor of Ogun State, Dapo Abiodun, noted that many people suffered loses in targeted attacks and must be made to have a sense of compensation.

He the council has re-committed to the protection of all residents without discrimination, adding that governors would also ensure that criminals are arrested and prosecuted.

He said NEC has resolved that there must be a public condemnation of hatred against minority groups, as it advised that members of non-indigenous groups should be incorporated into local security groups.

Abiodun said the council also deliberated on ways to better manage forests to deter criminals from inhabiting them for nefarious activities.

The council also encouraged states to promote the modernization of livestock farming.

“The protection of all residents of all states including non-indigenous communities and religious and ethnic minorities within state jurisdictions.

“The arrest and prosecution of all perpetrators of crime.

“In collaboration with federal authorities, the reconstruction of destroyed homes and payment of compensation where appropriate by state authorities for damage to property and livelihoods sustained during targeted attacks on communities within their jurisdictions;

“Ensuring that deceased victims of such violence are duly accorded dignified burial rites.

“The immediate public and unequivocal condemnation of all manifestations of hatred, targeted violence and other hate crimes against ethnic, religious and minority groups.

“Ensuring that local security initiatives – whether they are state government law enforcement agencies or local vigilante groups or the Community Policing programme of the Nigeria Police Force – are inclusive and are composed with due consideration given to the adequate representation of non-indigenous/minority resident communities.

“Ensuring that all state, local and communal security initiatives operate according to guidelines consistent with State legislation and the Constitution of the Federal Republic of Nigeria and other relevant laws and are subjected to rigorous oversight.

“Ensuring that innocent citizens and entire communities are not slandered, harassed or victimized for the crimes perpetrated by criminal elements within those communities on the basis of ethnic or religious affiliation.

“The continuing organization of and participation in Town hall meetings in the localities where ethnic strife has taken place by Governors representing all geopolitical zones.”

“Governors should tell their citizens that there are criminals among the herders, but law-abiding citizens should be protected.”

NEC also affirmed that the sub-Committee on National Livestock Transformation Plan (NLTP) developed by the council is voluntary.

Abiodun added: “Every States must have a choice on how it wants to implement it.

“Council also noted that forest has become a hide-out for criminals and said nobody should live in the forest.

“Governors should develop a plan to deescalate tension and implement it faithfully to diffuse tension.

“Council generally agreed that the principal thing is to de-escalate the tension and take control of some of the narratives to remove fear.”

He said findings indicated that there are many ad-hoc schemes, interventions, programmes etc. but poorly coordinated and without holistic Agenda or framework to address poverty, frequent policy changes and inconsistencies in the implementation of projects and programmes, good ideas without coherence or holistic agenda, poor adaptation to beneficiary needs, and limited scale of operation/ coverage, among others.