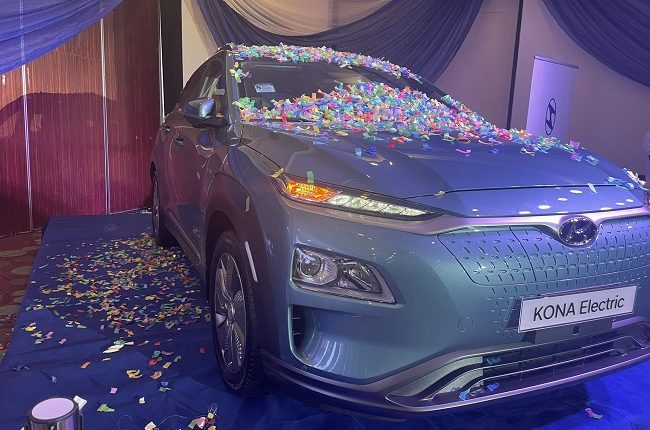 Stallion Motors have unveiled three Hyundai Kona being Nigerian first 100 per cent electric cars that were assembled in the country.

The cars which were unveiled by the Minister of Industry, Trade and Investment, Dr Otunba Richard Adebayo in Company of Minister of Works and Housing, Babatunde Fashola in Abuja in Friday has a price tag of N24 million per one.

Anant Badjatya, the CEO of the Stallion group said “Hyundai Kona is the first electric car in Nigeria.

“The car has 5 years battery and manufacturers warranty, 100 per cent electric, zero-emission and Hassle-free charging at home and workplace.

“Hyundai Kona has 482-kilometre ranger, has a capacity 1600 units, I believe that electric cars are the future of Auto” Badjatya stated.

While unveiling Hyundai Kona, the Minister of Industry, Trade and Investment, Dr Otunba Richard Adebayo noted that “in consideration of environmental degradation caused by global warming, another benefit of this vehicle to the automotive industry is the reduction of queues at filling stations.

“All that will be required is setting up charging stations in our respective homes, at strategic locations like shopping malls, event centres and other social and economic clusters in major cities and subsequently nationwide.

“I commend Stallion Group for this bold step considering the current global challenge caused by covid-19 and want to encourage them to keep investing in the expansion of Electric Vehicles and human capacity development in cooperation with the National Automotive Design and Development Council,” the Minister stated.

We will overcome COVID-19 ― Health minister

Bauchi gov gives daughter out in marriage, apologises for not inviting many guests