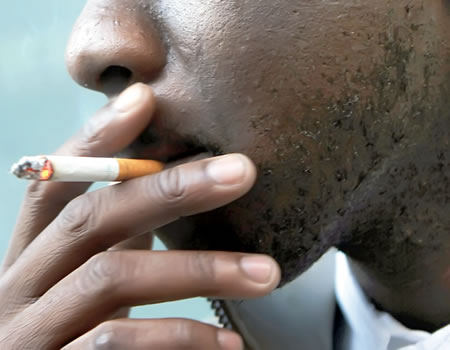 The Federal Government has said over 29,472 deaths are being recorded yearly in Nigeria attributable to smoking-related cases in the latest research finding just published in.

It also said there was a previous report published in 2018 by Tobacco Atlas which estimated that16,000 deaths were recorded from tobacco-related diseases every year.

Speaking at a briefing to commemorate 2021 World No Tobacco Day, on Monday, in Abuja, the Minister of Health, Dr Osagie Ehanire, pointed out that tobacco use or exposure to second-hand smoke is the leading preventable risk factor for non-communicable diseases (NCDs) like hypertension, stroke, cancers, diabetes and chronic obstructive pulmonary diseases.

Ehanire said World Health Organisation (WHO) data shows that there are over 1.3 billion tobacco users in the world, and that tobacco is in one way or another responsible for more than 8 million deaths each year.

“More than 7 million of which are as the result of direct tobacco use while around 1.2 million are the result of non-smokers being indirectly exposed to second-hand smoke.”

Ehanire also said in Nigeria, findings from the 2012 Global Adult Tobacco Survey (GATS) show that 5.6 per cent (4.5 million) Nigerians of 15 years and older, currently use tobacco products of which 3.9 per cent (3.1 million) are smokers.

“The GATS result further shows that 45.4 per cent of the smokers had attempted to quit in the past 12 months prior to the survey, of which 61.1 attempted to do so without any assistance while 15 per cent tried counseling and 5.2 per cent tried pharmacotherapy.

“The death toll from tobacco is high in Nigeria, as the Tobacco Atlas of 2018 reports estimates of more than 16,100 deaths from tobacco-related diseases every year.

“Another research finding published in 2021 by the Centre for the Study of the Economies of Africa showed that 29,472 deaths in Nigeria were attributable to smoking,” Ehanire said.

In tacking the tobacco menace, Ehanire disclosed that Nigeria signed and ratified the WHO Framework Convention on Tobacco Control (FCTC) in 2004 and 2005 respectively.

“The theme for the 2021 “World No Tobacco Day”: “Commit to Quit” comes at a good time, when the global community is battling the COVID-19 pandemic.

“This is especially so, as evidence has shown that tobacco users and those with underlying non Communicable Diseases (NCDs) are at higher risk of severe COVID-19 outcomes.”

Ehanire further disclosed that the Federal Ministry of Health is committed to supporting people to quit tobacco use.

“In 2019, the Ministry, in collaboration with WHO and the European Respiratory Society, piloted tobacco cessation services in some healthcare facilities in the Federal Capital Territory, Abuja.”

“We intend to scale this up to other parts of Nigeria, in the near future, so that more tobacco users can have access to cessation services. He added.

The Country Representative of WHO, Walter Kazadi Molumbo said Nigeria was selected as one of the 22 countries for support by WHO (HQ/AFRO) to scale-up programmes to help people quit tobacco, especially at the primary health care and community levels.

Molumbo said this will include the setting up of a toll-free quit line and the pilot of a WHO supported mobile cessation (mCessation) programme for a period of  9–12 months through the use of pre-designed WhatsAPP toolkit and Facebook Messenger in different languages.

Mulumbo disclosed that for the last three years, Nigeria has received a World No Tobacco Day Award which recognises individuals or organisations for their accomplishments in the area of tobacco control.

“This year, we have one awardee from Nigeria amongst the six awardees from the African Region.”

“As WHO, we pledge to continue supporting the country to meet their obligations under the WHO Framework Convention on Tobacco Control.

“The theme for this years WNTD is Commit to Quit, but to us the most effective steps towards getting people to quit, or not initiated into tobacco addiction is by removing all the environments that promote smoking or those that encourage our youths to take up smoking habit.

Oluwafemi also called on government to enforce ban on Tobacco Advertising and Promotion including the ban on smoking in movies and entertainment platforms, enforce graphic health warning on tobacco packs, enforce the ban of the sale of tobacco products to underage and raise taxes tobacco products among other.

“The laws are there, and the government must rise to the occasion by implementing those laws which it could complement with the incorporation of quitting services into the primary health care system, counselling and public awareness,” Oluwafemi added.

CLAIM: A viral post on WhatsApp is asking N-Power candidates to verify if they have been shortlisted to receive ₦30,700 Batch C grant.Smoking kills 29,472 Nigerians annually ― Study